Awardees, including 20 nominated by NSF, represent science and engineering expertise across a breadth of disciplines and research areas 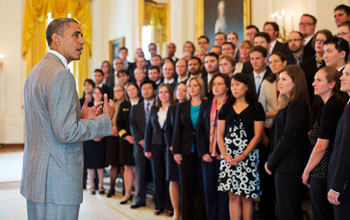 Download the high-resolution JPG version of the image. (325 KB)

The research of 2011 PECASE recipients Mayly Sanchez of Iowa State and Scott Gaudi of Ohio State centers on the quest for further understanding of the composition and complexities of the universe. Both were funded by NSF's Directorate for Mathematical & Physical Sciences. Sanchez received her PECASE "for contributions to the detection and study of neutrinos and their role in some of the most fundamental problems in physics, and for reaching out to potential women STEM majors and exciting them about opportunities in the STEM fields, in particular physics and astronomy." Gaudi received his PECASE "for contributing to our understanding of Earth's place in the Universe through the study of the demographics of exoplanetary systems, and for reaching out to oft-overlooked, underrepresented groups of children and students in the LGBTQ and HIV-positive communities."

The research of 2011 PECASE recipients Meghan Duffy of the Georgia Tech and David Noone of the University of Colorado, Boulder, focuses the health of human beings and the environment in which they live. More specifically, Duffy, funded by NSF's Directorate for Biological Sciences, received her PECASE "for transformative research on rapid evolutionary responses in novel host-parasite associations, and for providing educational opportunities for college students in underrepresented minority groups and inner-city K-12 students in Atlanta." Noone, funded by NSF's Directorate for Geosciences, received his PECASE "for innovative use of stable isotope tracers and modeling efforts directed towards an integrated understanding of the cycling of water and carbon dioxide through the atmosphere, and for actively engaging students in cutting-edge research at middle schools."

The research and outreach activities of 2011 PECASE recipients Alice Louise Pawley of Purdue University and Jennifer Wortman Vaughan of the University of California, Los Angeles, center around the inclusion of more women in their male-dominated fields of Engineering and Computer Science. More specifically, Pawley, funded by NSF's Directorate for Engineering, received her PECASE "for outstanding research on root causes of under-representation in engineering degree programs, for educational activities and outreach to students and faculty, and for academic leadership to support equality of access to education." Vaughan, funded by NSF's Directorate for Computer and Information Science and Engineering, received her PECASE "for ground-breaking research unifying machine learning, algorithmic aspects of economics, and social network theory leading to predictive models of preferences and collective behavior, and for increasing the participation of women in computing and providing service to the machine learning and artificial intelligence research communities."

The research of 2011 PECASE recipients Baratunde Aole Cola of Georgia Tech, funded by NSF's Directorate for Engineering, and Suzanne Shontz of Penn State, funded by NSF's Office of Cyberinfrastructure, focuses on the underlying research that leads to efficient and competitive product design and application. More specifically, Cola received his PECASE "For outstanding research on energy conversion, nanoscale transport and materials, and for significant outreach and educational activities involving K-12 students and teachers from disadvantaged minority communities." Shontz received her PECASE "for exemplary research in computational and data-enabled science and engineering that bridges applied mathematics, computer science, and scientific applications, and for contributions to education, including new curricula and approaches that encourage diversity in this emerging field." 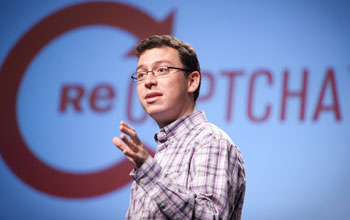 Luis von Ahn, considered an entrepreneur in computer scientist, is shown teaching a class a Carnegie Mellon. In addition to the PECASE, von Ahn has many other awards and honors to his credit. He delivered the distinguished lecture to National Science Board last year on the occasion of NSF's sixtieth anniversary.

Download the high-resolution JPG version of the image. (5.4 MB)