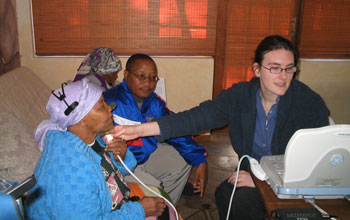 Ouma Katrina Esau, a N|u speaker, speaks into a head-mounted microphone while holding an ultrasound probe in place. Linguist Johanna Brugman of Cornell University (at right) monitors the video feed on an Ultrasound laptop while adjusting the probe to get a better image of Ouma Katrina Esau's tongue. Translator Willem Damarah looks on. Ouma Hanna Koper sits quietly at the end of the couch. In speaking N|u, the tongue makes coordinated movements not found in most other languages of the world. By making an ultrasound video, researchers can better explain to linguists and language learners how the tongue moves. The probe must be adjusted so that the shadows of the jaw and hyoid bones appear at either edge of the monitor and so that a clear line of the top surface of the tongue can be seen.

The gelatinous-looking piece of plastic between Ouma Esau's chin and the probe is a custom-made offset designed to help achieve an image of the top surface of the tongue, which is at a shallower depth than the probe was designed for.

Download the high-resolution JPG version of the image. (468 KB)