Mussel-powered proteins stick to Teflon, even under water 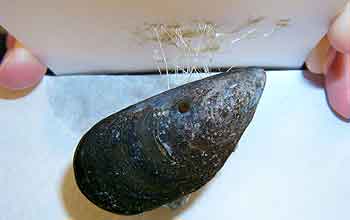 ARLINGTON, Va.—Researchers have discovered that iron in seawater is the key binding agent in the super-strong glues of the common blue mussel, Mytilus edulis. This is the first time researchers have determined that a metal such as iron is critical to forming an amorphous, biological material.

In addition to using the knowledge to develop safer alternatives for surgical and household glues, the researchers are looking at how to combat the glue to prevent damage to shipping vessels and the accidental transport of invasive species, such as the zebra mussel that has ravaged the midwestern United States.

En route to crafting synthetic versions of the glue, the researchers discovered that bivalves extract the metal iron from the surrounding seawater and use it to join proteins together, linking the fibrous molecules into a strong, adhesive mesh. The 800 mussels in Wilker's laboratory have an uncanny ability to stick to almost anything, even Teflon®.

"Mussel glues present the first identified case in which transition metals are essential to the formation of a non-crystalline biological material," says NSF CAREER awardee Jonathan Wilker of Purdue University.

"We are curious as to whether or not this newly discovered, metal-mediated protein cross-linking mechanism of material formation is a prevalent theme in biology. We will be exploring systems such as barnacle cement, kelp glue and oyster cement to see how other biomaterials are produced," says NSF CAREER awardee Jonathan Wilker of Purdue University.

"The biological origin of this glue and the ability to stick to nearly all surfaces invite applications such as the development of surgical adhesives," says NSF CAREER awardee Jonathan Wilker of Purdue University.

"Understanding how marine glues are formed could be key to developing surfaces and coatings to prevent adhesion processes. Current antifouling paints rely upon releasing copper into surrounding waters, thereby killing barnacles in their larval state. We are hoping our results will help make antifouling paints that do not require the release of toxins into the marine environment," says NSF CAREER awardee Jonathan Wilker of Purdue University.

NSF comments regarding the research discovery and the Wilker group:

"It appears that the strength, sticking power and endurance of these extraordinary biological materials may derive from inorganic chemistry," says chemist Mike Clarke, the NSF program officer who oversees Wilker's award.

"Proteins often rely on metal ions to tie them together and provide stability, but this is the first time that a transition metal ion has been determined to be an integral part of a biological material," says chemist Mike Clarke, the NSF program officer who oversees Wilker's award.

"The research wonderfully illustrates the potential for metal ions to strengthen materials by cross-linking polymer chains. More important to researchers is the tantalizing suggestion that the remarkable adhesive properties of these biological glues lie in an iron-dependent oxidation to radicals," says chemist Mike Clarke, the NSF program officer who oversees Wilker's award.

"This discovery could lead to the creation of unusual new materials with designed plasticity, strength and adhesiveness for household, structural and biological uses. Perhaps, these properties could even be made dependent upon electrochemical potential thereby creating new vistas for electronic materials," says chemist Mike Clarke, the NSF program officer who oversees Wilker's award.

The Faculty Early Career Development (CAREER) Program is a Foundation-wide activity that offers the National Science Foundation’s most prestigious awards for new faculty members. The CAREER program recognizes and supports the early career-development activities of those teacher-scholars who are most likely to become the academic leaders of the 21st century. CAREER awardees will be selected on the basis of creative, career-development plans that effectively integrate research and education within the context of the mission of their institution. NSF encourages submission of CAREER proposals from new faculty at all CAREER eligible institutions. Such plans should build a firm foundation for a lifetime of integrated contributions to research and education.