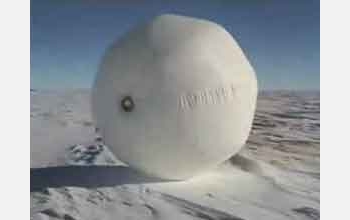 ARLINGTON, Va.—A balloon-shaped robot explorer that one day could search for water on other planets has survived some of the most trying conditions on planet Earth during a 70-kilometer (40-mile), wind-driven trek across Antarctica.

Along the way, the beach-ball-shaped device, roughly two meters (six feet) in diameter, used the global Iridium satellite network to send information about its position, the surrounding air temperature, pressure, humidity and light intensity to a JPL ground station.

The test was designed to confirm the rover's long-term durability in an extremely cold environment, with an eye toward eventually using the devices to explore the Martian polar caps and other planets in the solar system. It reinforces the findings of a test conducted previously on the Greenland ice cap, also carried out under the auspices of NSF's Office of Polar Programs (OPP).

OPP manages the U.S. Antarctic Program, arranging logistical support and infrastructure for NSF-supported scientists as well as other government agencies, such as NASA, when they conduct science in Antarctica.

NSF is an independent federal agency that supports fundamental research and education across all fields of science and engineering, with an annual budget of nearly $5.58 billion. NSF funds reach all 50 states through grants to nearly 2,000 universities and institutions.

The final Tumbleweed Rover is envisioned as a lightweight, roughly 40-kilogram (88 pound) device that can serve multiple roles as an independent robotic explorer. The rover's design allows it to act as a parachute while descending through an atmosphere, an air bag on landing, and, ultimately, as an unmanned vehicle equipped with an package of scientific instruments.

Tumbleweed is the brainchild of several JPL scientists, including Alberto Behar, a researcher with JPL's robotic vehicles group.

During a three-day deployment at the South Pole, Behar unpacked, assembled, inflated, tested, and deployed the rover. He says that the efficiency of the deployment is testament to Tumbleweed’ s cost-effectiveness and ease of use.

The winds at the South Pole were unusually low during the test. As a result, the rover did not move at all for several periods during its deployment.

But, even taking those lulls into account, Tumbleweed managed an average speed of 1.3 kilometers per hour (0.8 mph) over the course of the deployment. Such speeds are unattainable in conventional, mechanical rovers—such as Spirit and Opportunity, currently operating on the surface of Mars—which average little more than 0.05 kilometers per hour (0.03 mph) on flat, dry ground.

Behar said the rover's design is especially well suited for polar missions that use instrument packages to look for water beneath the surface of an ice sheet, a task that cannot be done accurately from orbit.

Plans to construct the next generation Tumbleweed rover are already underway at JPL.

Design refinements are likely to focus on reducing the rover's weight and rolling resistance to lower the minimum winds needed to propel the rover and enable it to travel farther and adapting the payload to include a ground-penetrating radar or magnetometer to conduct ice surveys.

Behar said he hopes an updated version of Tumbleweed will be deployed again in late 2004 or early 2005, and that the Tumbleweed design may one day find itself rolling over the polar icecaps of Mars.

For a fact sheet on NSF's scientific logistics in the Polar Regions, see http://www.nsf.gov/od/lpa/news/media/01/fslogistics.htm

A JPL Web site contains information about previous tests of the Tumbleweed as well as animations of how the device might appear during a deployment on Mars, see: http://www.jpl.nasa.gov/technology/features/tumbleweed.html