Turning Robots into a Well-Oiled Machine

Robot teams to help emergency responders in the trenches 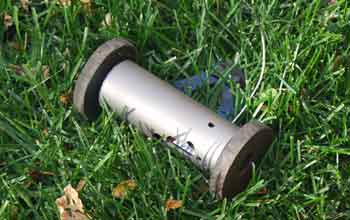 ARLINGTON, Va.—Humans are social creatures, but robots, for the most part, are not. To help emergency response personnel in the trenches, a team of researchers is writing the playbook to turn a group of robots into a single well-oiled machine.

Led by Nikos Papanikolopoulos, researchers at the University of Minnesota, the University of Pennsylvania and Caltech are devising software that will allow small robots to coordinate their actions and carry out complex commands from a human operator. The work is supported by a $2.6 million Information Technology Research award from the National Science Foundation (NSF), an independent federal agency that supports fundamental research and education across all fields of science and engineering.

Robots need far more than the team-building exercises offered by corporate consultants. To be a useful tool at disaster sites, robot teams need software for collaborative sensing, for distributed exploration and mapping, for reliable team coordination independent of a human operator and for effective communication with their operators.

"Effective teamwork doesn't translate easily into electronics, and at disaster sites, it could literally mean the difference between life and death," said NSF program officer Rita Rodriguez. "Addressing the research challenges requires a multidisciplinary approach and, for this project, the combined expertise of the three-campus research team."

The University of Pennsylvania collaborators, led by Kostas Daniilidis, bring their omnidirectional camera and expertise in robotic vision, perception, as well as experience in control theory needed for team coordination.

The Caltech researchers, led by Joel Burdick, have critical expertise in sensor-based exploration and distributed mapping and coverage—to ensure that the robot team can see every last inch of an area, for example.

Papanikolopoulos and the Minnesota contingent bring the robots as well as experience in computer vision, digital communication and other areas. Papanikolopoulos's decade-long history of NSF support includes current awards to monitor human activities using surveillance video and to design and build the latest generation of the robots being used in the team-building project.

Called Scouts and built with off-the-shelf electronics, the robots have been designed to withstand a lot of punishment. Scouts can survive a six-story drop into a collapsed building or a 100-foot throw into unfamiliar territory.

All this in a cylindrical package 100 millimeters (3.9 inches) long and 35 millimeters (1.4 inches) in diameter—roughly the size and shape of the cardboard tube inside a roll of toilet paper.

The Scout's sensors make it possible for the research team to experiment with programming the Scouts to perform activities on their own, such as finding a dark location in which to hide. However, a single Scout still can't do everything that emergency personnel might want. For tasks such as collecting air samples, testing for toxic fumes or keeping surveillance over a large area, Scouts would have to work together.

An emergency response robot "dream team" might have a roster of a dozen or more Scouts with a combination of sensing devices and, through the team leader, could perform more complex tasks and report back to a human operator.

The team leader, in this case, will be the Minnesota-developed MegaScout, a 15-inch-long sibling of the Scout which can carry larger sensors, a manipulator arm (for opening doors, lifting Scouts and similar tasks) and the processing power to control the Scout team in the field.

"The emergency response personnel we've talked to tell us they wouldn't want to control more than about three robots at a time. There's just too much information," Papanikolopoulos said. By focusing only on the robot team leaders, each human operator could control dozens of robots. "Eventually, we'd like to allow teams of human operators control a hundred or so robots organized into teams, with each human operator communicating with about three robot team leaders. For emergency response, this makes sense."