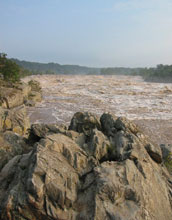 Potomac River cuts through Mather Gorge; Geologic process has been on-going for some 35,000 ...

ARLINGTON, Va.—In the first study to directly measure when and how quickly rivers outside of growing mountain ranges cut through rock, geologists at the University of Vermont have determined that it was about 35,000 years ago that the Potomac and Susquehanna rivers, respectively, began carving out the Great Falls of the Potomac and Holtwood Gorge. Great Falls, located about 15 miles outside of Washington, D.C., hosts hundreds of thousands of visitors each year; Holtwood Gorge lies along the Susquehanna River, near Harrisburg, Penn.

As reported in the July 23 issue of the journal Science, the geologists analyzed rock samples collected from the gorges for 10-beryllium, a very rare isotope that is produced when cosmic rays collide with rocks and sediments at the Earth's surface. These analyses helped them gauge when the rivers abandoned their ancient beds and, consequently, exposed bare rock surfaces, known as terraces, where people climb and hike today. Knowing the age of each river terrace and its height above its current river bed, they were able to calculate how quickly the rivers cut through bedrock. Their conclusions: Incision of the 10- to 20-meter-deep gorges happened at a rate far more rapid than previously thought and was prompted more by regional climate changes tied to the last ice age than by water pouring from melting glacial ice.

"The period of incision we measured correlates with a period of cold and stormy climate during the last glacial period that is also recorded in ice cores drilled into the Greenland ice sheet," said Luke Reusser, a geologist at the University of Vermont and lead author of "Rapid Late Pleistocene Incision of Atlantic Passive-Margin River Gorges."

"Because bedrock is hard and resistant to erosion, most incision within rivers running over rock occurs during extremely large flood events," Reusser explained. "Changing climate, capable of increasing the number and severity of floods, appears to have sped up the rate of incision along both rivers about 35,000 years ago."

The five-year project is unique because it used many samples closely spaced to understand the spatial patterning of how and when the rivers cut into rock, according to Paul Bierman, also a geologist at the University of Vermont and co-author of the Science paper. "Without such detail, we never would have been able to detect the link with climate, nor would we know that Great Falls, probably the most visited stretch of the Potomac, has existed there for nearly 30,000 years," Bierman said. His group continues to take samples from the area and is completing a second paper on the Susquehanna sites.

"Scientifically, these are the first data that tell us how quickly rivers of the eastern seaboard cut into rock," said Enriqueta Barrera, director of the Geology and Paleontology Program, Division of Earth Sciences at the National Science Foundation (NSF). NSF and the U.S. Geological Survey funded the research. "The Potomac and Susquehanna have shown they can cut nearly a meter of solid rock every thousand years, she said. "Pretty impressive for old rivers."

"There are gorges all over the world that are undated," Bierman said. "We want to work next on other East Coast rivers and streams to see how similar their histories are to the two major rivers sampled so far, the Susquehanna and Potomac."