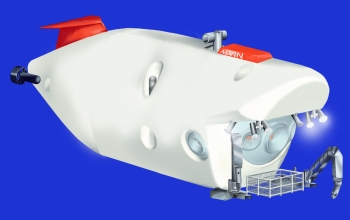 Artist's rendition of the replacement human-occupied vehicle (HOV) for ALVIN.

ARLINGTON, Va.—After 40 years of scientific research that led to the discovery of new life forms, helped confirm the theory of plate tectonics, and enthralled schoolchildren around the world with seafloor images and video, the research submersible Alvin will be replaced by a new, deeper-diving vehicle.

The National Science Foundation (NSF) will provide funding for the vehicle through a cooperative agreement with the Woods Hole Oceanographic Institution (WHOI). A 2004 National Research Council (NRC) report, Future Needs of Deep Submergence Science, recommended construction of a new, more capable HOV as part of a suite of tools for ocean research, which includes remotely operated vehicles (ROVs) and autonomous underwater vehicles (AUVs). The preliminary report of the U.S. Commission on Ocean Policy also points to the importance of research and exploration of the deep seafloor, and to the excitement emanating from such missions to the depths of the ocean.

A merit-based review of an unsolicited proposal led to a cooperative agreement with WHOI for the first phase of construction.

"Most of the seafloor is unexplored, yet it is one of the most exciting environments on our planet," said Arden Bement, acting director of NSF. "This new submersible will be the flagship for the next phase of deep-sea exploration, and the many exciting discoveries that are anticipated in coming decades. New developments in communication technology also will link deep submergence scientists in real time with shore-side observers to encourage the next generation of ocean explorers."

The replacement vehicle will be capable of reaching more than 99 percent of the seafloor to depths of 6,500 meters (21,320 feet) and conducting a broader range of research projects around the world.

When completed in 2008, it will be the most capable deep-sea research vehicle in the world. Alvin, which has undergone nearly continuous upgrades since its launch in 1964, dives to 4,500 meters (14,764 feet).

The four-year design and construction project is expected to cost $21.6 million and will be funded largely by NSF. WHOI will operate the new sub as part of the National Deep Submergence Facility and will provide $2 million of its own funds for the project: $1 million for enhancements to the submersible's imaging and lighting systems and other sensors, and $1 million toward operating costs for the first four years.

The design of the replacement human-occupied vehicle (HOV) for Alvin is the result of more than 10 years of discussions and input from the scientific community. Although Alvin was the first human-occupied vehicle in routine use in the deep sea and remains the most scientifically productive vehicle, HOVs operated by Japan, Russia and France now have some capabilities that surpass those of Alvin, and China is building its first deepdiving HOV.

"The contribution Alvin has made to science is unquestioned," said Robert Gagosian, president and director of WHOI. "Alvin enabled whole generations of scientists to gain access to a previously unseen world, and for engineers to push the limits of their creativity. The replacement vehicle is designed to continue and extend this legacy."

In addition to diving 40 percent deeper than Alvin can, major upgrades in the new vehicle include:

The replacement for Alvin will require no major modifications to the 274-foot Research Vessel Atlantis, its support ship, and its operating costs will be similar to those of the current Alvin.

The replacement HOV will provide expanded access for scientific research in areas of the ocean that are virtually unexplored. Midocean ridge research and the study of hydrothermal and fluid flow processes on the ridge flanks near oceanic trenches and along the deeper portion of the continental margins will rely heavily on the HOV for its unsurpassed observation and sampling capabilities.

The project leader will be project director Barrie Walden. The project manager is Robert Brown. Both are long-time members of the WHOI submersible engineering and operations group, which operates the current Alvin. In addition, an HOV Replacement Oversight Committee will include scientists, engineers and other research vehicle operators from around the country to advise the project.

Walden noted that the replacement HOV will present a number of technical challenges. New types of flotation material, capable of withstanding pressures of nearly 10,000 pounds per square inch at 6,500 meters depth, must be fabricated and certified for use. Forging and welding the three-inch thick titanium personnel sphere is complex. New types of batteries to power the vehicle will be required, and a variable ballast system must be designed to adjust for changes in payload, and to enable the sub to descend and ascend, and hover to conduct research in the mid- water zone.

Alvin is one of only five deep-diving human occupied vehicles in the world and the only such HOV in the United States. Alvin revolutionized deep-sea exploration by providing U.S. scientists with an unprecedented ability to routinely conduct research on the deep-sea floor, at mid-ocean ridges and hydrothermal vents with exotic marine life now believed to hold clues to the origin of life on Earth.

More than 4,000 dives have transported 12,000 people to the seafloor to spend 16,000 hours on the bottom to observe and sample the deep. With a current average of 175 dives per year, Alvin has a reliability record greater than 95 percent over the past 20 years, with the remaining percentage lost mainly to bad weather.

Alvin has been a major participant in historic expeditions, from Project FAMOUS and the confirmation of the theory of plate tectonics and continental drift in 1974, to the discovery of hydrothermal vents in 1977 and black smokers two years later, to exploring the wreck of RMS Titanic in1986. More than 1,800 refereed science publications include results of Alvin-based research.

"The replacement HOV will significantly expand our access to the deep sea allowing researchers to explore the frontiers of ocean science in areas previously beyond their grasp," said Maurice Tivey, WHOI's acting chief scientist of deep submergence. "It is a major step forward in ocean exploration and brings a new level of versatility and capability to scientists wishing to pursue research projects on a routine basis in areas they have long wanted to study but have been unable to reach. HOVs provide unprecedented 3-D visibility and ease of sampling, put observations in context, and are an essential tool for educating students and the public about the meaning and value of deep-ocean research."