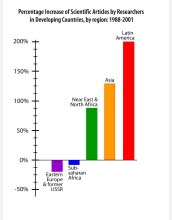 Arlington, Va.—The number of science and engineering (S&E) articles credited to Latin American authors almost tripled in the 13-year period from 1988-2001, significantly outpacing authors of other developing regions in the world. The output of Latin American authors grew by about 200 percent, by far the highest rate of increase during the period (see figure).

The new NSF report, which provides data and analysis on science and engineering (S&E) articles produced by authors in developing countries, said that Latin American authors have been published in the world’s most influential journals, such as Science and Nature.

From 1988-2001, Brazil's output of articles quadrupled, while Mexico's more than tripled. The four leading countries, plus Costa Rica, Colombia, and Venezuela accounted for 95 percent of the Latin American contribution.

By field, the largest numbers of articles, and the largest shares, were in engineering and technology, along with biology and many of the physical sciences. In contrast, the social and behavioral sciences, clinical medicine and biomedical research showed a slower-than-average growth rate. However, the life sciences still accounted for nearly half of all Latin American articles in 2001.

"This increase in citations could reflect a well-documented tendency for authors to cite articles from their own countries," says Derek Hill, who produced the NSF report for NSF's Division of Science Resources Statistics. "Yet the data suggest that most of the increase was from authors outside of Latin America citing Latin American authors."

Latin American authors are also collaborating more on articles -- with each other, and with scientists and engineers internationally. Fifty percent of Latin American articles were coauthored in 1988, according to Hill, rising to 71 percent in 2001. Their international collaborations also became more prominent. Latin Americans coauthored rising numbers of articles with researchers from other nations (from 29 percent in 1988 to 43 percent in 2001). The number of countries represented in coauthorships with Brazilian authors more than doubled from 46 in 1988 to 103 in 2001.

See the whole report at http://www.nsf.gov/sbe/srs/infbrief/nsf04336/start.htm.