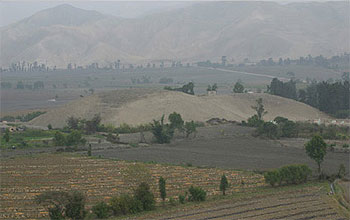 Overview of a mound complex at the site of Vinto Alto in the Pativilca Valley, Peru.

Arlington, Va.—The Norte Chico ("little North") region midway on the Peruvian coast contains the earliest known evidence of a cohesive, large-scale and organized society in the Andean region. Recent archaeological discoveries, reported in the December 23 issue of the journal Nature, reveal the extent of this civilization.

A scientist might not pick that area as a likely site for an early and extensive civilization. There was no pottery. The people did not have a staple grain-based food, usually characteristic of other early civilizations. It was not even particularly fertile – irrigation was needed to grow crops. Neverthless, the research team has shown that the Andean area was home to a hunting and gathering society that developed into a complex society with monumental architecture, large circular ceremonial structures, and a mixed economy of agriculture and marine exploitation – all earlier than any other Andean civilization.

"This area is one of the world's 'cradles of civilization,'" said John Yellen, program manager at the National Science Foundation, which partially funded the study. "So this project's evidence of a highly developed, widespread society earlier than had been thought is very important. It provides new insight into the pathways that led to the development of complex societies."

Jonathan Haas, from The Field Museum in Chicago; and Winifred Creamer, of Northern Illinois University, were part of the research team; Alvaro Ruiz was the Peruvian co-director of the project.