The Dynamo in the Cornfield

To understand our planet's magnetic field, Wisconsin scientists are studying a ball of molten metal 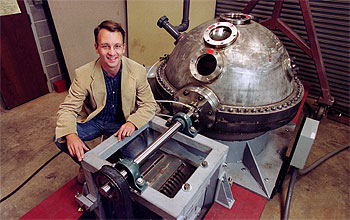 University of Wisconsin physicist Cary Forest with a prototype of the Madison Dynamo Experiment.

Madison, Wis.,--In an underground bunker that brushes up against a barnyard on one side and a cornfield on the other, scientists from the University of Wisconsin, Madison, are trying to solve an enduring cosmic mystery: how does the Earth generate its magnetic field—the vast, invisible web that shapes the aurora, makes compass needles point north, and shields us from solar storms? And how do similar fields get generated in almost every other planet in our solar system, as well as in the Sun, other stars, and even entire galaxies?

Their tool is the Madison Dynamo Experiment, a newly operational laboratory model of the Earth's molten core. Five years in the making, with support provided jointly by the National Science Foundation (NSF) and the Department of Energy, the experiment is the largest of half a dozen such efforts worldwide. And like all the others, says UW physicist Cary Forest, principal investigator on the project, it is designed to fill in some gaping holes in our understanding.

Theory has it that magnetic fields tend to arise spontaneously in any rotating, electrically conducting fluid, explains Forest, whether that fluid is the molten iron in the Earth's deep interior or the multi-million-degree plasma at the center of the Sun. But empirical evidence is much harder to come by, given that no one has yet figured out how to stick a probe into the core of the Earth, or into the heart of a star.

Thus the gaps. Says Forest, "How fast do the naturally occurring magnetic fields grow? When do they stop growing? What causes them to stop growing? That's the big one. These are really, really fundamental questions that theory doesn't address."

And thus the Madison Dynamo Experiment. At its heart is a one-meter-wide, stainless steel sphere that contains about a ton of sodium metal, which serves as the conducting fluid. Sodium metal is a dull, silvery substance that has the consistency of soft cheese at room temperature, and a dangerous habit of reacting violently with moisture and many other things. But sodium also has the advantage of melting at the comparatively low temperature of 98 degrees centigrade, or 208 degrees Fahrenheit, above which it flows like water. (Iron, by contrast, doesn’t melt until 1538 degrees centigrade, or 2800 degrees Fahrenheit.)

When the experiment is in operation, two opposing propellers stir the molten sodium in ways that approximate the flow of molten iron inside the Earth.

"At the core of the Earth, it is thought that there are lots of little flows and swirls occurring that contribute to the generation of the planet's magnetic field," says Forest. But "it's the details that are important, and with the Madison Dynamo Experiment we can turn the knobs and see what happens."

Indeed, says Forest, with the Madison Dynamo Experiment now operational and generating data, the secrets of how natural dynamos perform will begin to emerge and the limits of current theory can begin to be tested.