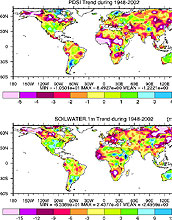 This graph shows depiction of linear trends in the PDSI.

ARLINGTON, Va.—Arlington, Va. --The percentage of Earth's land area stricken by serious drought more than doubled from the 1970s to the early 2000s, according to a new analysis by scientists at the National Center for Atmospheric Research (NCAR) in Boulder, Colo. Widespread drying occurred over much of Europe and Asia, Canada, western and southern Africa, and eastern Australia. Rising global temperatures appear to be a major factor, says NCAR scientist Aiguo Dai.

Dai will present the new findings on Weds., Jan. 12th at the American Meteorological Society (AMS) annual meeting in San Diego, Calif. The work also appeared in a paper published in the December issue of the Journal of Hydrometeorology; co-authors are NCAR's Kevin Trenberth and Taotao Qian.

The study was supported by the National Science Foundation (NSF), NCAR's primary sponsor. "The results reconfirm the complexity of the climate system," says Cliff Jacobs, program director in NSF's division of atmospheric sciences. "We need to continue to develop a wide variety of research tools to understand these changes."

Dai and colleagues found that the fraction of global land experiencing very dry conditions rose from about 10-15 percent in the early 1970s to about 30 percent by 2002. Almost half of that change is due to rising temperatures rather than decreases in rainfall or snowfall, according to Dai.

Even as drought has expanded across Earth's land areas, the amount of water vapor in the air has increased over the past few decades. Average global precipitation has also risen slightly. However, as Dai notes, "surface air temperatures over global land areas have increased sharply since the 1970s." The large warming increases the tendency for moisture to evaporate from land areas. Together, the overall area experiencing either very dry or very wet conditions could occupy a greater fraction of Earth's land areas in a warmer world, Dai says.

"Droughts and floods are extreme climate events that are likely to change more rapidly than the average climate," says Dai. "Because they are among the world's costliest natural disasters and affect a very large number of people each year, it is important to monitor them and perhaps predict their variability."

To see how soil moisture has evolved over the last few decades, Dai and colleagues produced a unique global-scale analysis using the Palmer Drought Severity Index, which for decades has been the most widely used yardstick of U.S. drought. The index is a measure of near-surface moisture conditions and is correlated with soil moisture content.

Since the Palmer index is not routinely calculated in most of the world, Dai and colleagues used long-term records of temperature and precipitation from a variety of sources to derive the index for the period 1870–2002. The results were consistent with those from a historical simulation of global land surface conditions, produced by a comprehensive computer model developed by scientists at NCAR, NASA, Georgia University of Technology, the University of Texas at Austin, and the University of Arizona.

By factoring out rainfall and snowfall, Dai and colleagues estimated how much of the global trend in soil moisture was due solely to rising temperatures through the extra evaporation they produce.

"The warming-induced drying has occurred over most land areas since the 1970s," says Dai, "with the largest effects in northern mid- and high latitudes." In contrast, rainfall deficits alone were the main factor behind expansion of dry soils in Africa’s Sahel and East Asia. These are regions where El Niño, a more frequent visitor since the 1970s, tends to inhibit precipitation.

Though most of the Northern Hemisphere has shown a drying trend in recent decades, the United States has bucked that trend, becoming wetter overall during the past 50 years, says Dai. The trend is especially notable between the Rocky Mountains and Mississippi River. Other parts of the world showing a moistening trend include Argentina and parts of western Australia. These trends are related more to increased precipitation than to temperature, says Dai.

"Global climate models predict increased drying over most land areas during their warm season, as carbon dioxide and other greenhouse gases increase," says Dai. "Our analyses suggest that this drying may have already begun."

At the AMS conference, Trenberth will also present results on Tues., Jan. 11th from a workshop on drought. Among the questions addressed: What is the full range of past drought variability, as revealed by paleoclimate data? What role might droughts associated with abrupt climate change play? Are droughts likely to become more frequent, longer, or more extensive as we move into a future with global warming?