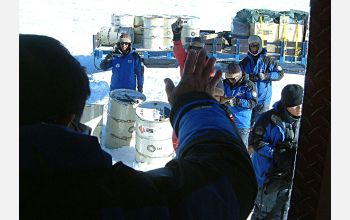 The patient waves as he prepares to leave for NSF's Amundsen-Scott South Pole Station.

ARLINGTON, VA.—A Chinese engineer who became seriously ill while crossing East Antarctica for his nation as part of a scientific traverse is resting comfortably in New Zealand today after a U.S. aircraft flew him to the National Science Foundation's Amundsen-Scott South Pole Station for medical treatment.

The 49-year-old hydraulics engineer, whose identity is being kept confidential, began experiencing chest pains on Jan. 7, after climbing to the roof of a Chinese traverse vehicle to perform a task the night before, according to Jihong Cole-Dai, a Mandarin-speaking U.S. glaciologist who was working at the South Pole. Cole-Dai, of South Dakota State University, served as an interpreter during the medical mission.

According to Chinese officials, as interpreted by Cole-Dai, the patient awoke on Jan. 7 feeling weak and unwell, and experiencing chest pains, which recurred throughout the day.

The patient is a member of the 21st Chinese National Antarctic Research Expedition (CHINAIRE) traverse team, which left China's Zhongshan Station on Dec. 12 on an expedition marking the first human attempt to scale Dome Argus, an ice-covered mountain roughly 650 nautical miles (740 miles) from the South Pole, according to Chinese officials. The expedition was also laying the groundwork for selecting a location for a new Chinese Antarctic research station.

The traverse team was at Dome Argus at roughly 4022 meters (13,000 feet) elevation when the engineer became ill. Physicians became concerned that the patient might be suffering from severe and potentially fatal complications of altitude sickness.

A Twin Otter aircraft flown by Kenn Borek Air, Ltd., of Canada, chartered by NSF for scientific work, left the South Pole at approximately 9 a.m. on Jan. 8 for the four-hour flight to Dome Argus. In addition to the pilot and co-pilot, the plane carried Christian Otto, one of two South Pole physicians, and interpreter Cole-Dai.

The patient was treated and kept comfortable at the Pole, then transported on a flight to McMurdo Station, NSF's logistics hub in Antarctica. The patient remained stable and was flown to New Zealand, arriving in Christchurch on the morning of Jan. 17.

A more complete diagnosis of the patient's condition will be made in Christchurch. Otto reported that ailing engineer did not seem to be suffering from high-altitude pulmonary edema.

U.S. flights from the continent depart McMurdo Station daily, but bad weather at the station grounded all flights for several days, making it impossible for a medical flight to take the patient back to New Zealand.