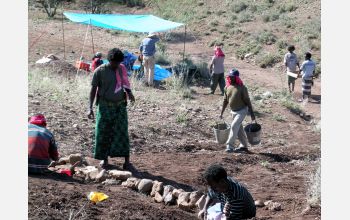 Excavation of a hominid site at Gona, Afar region, Ethiopia

Arlington, Va.— An Indiana University team of anthropologists has excavated fossils of early humans in Gona, in the Afar region of Ethiopia, which they believe come from nine individuals of the species Ardipithecus ramidus who lived between 4.3 and 4.5 million years ago.

The research is reported in the Jan. 20, issue of the journal Nature.

"While biomolecular evidence helps us to date the timing of major events in the evolution of apes and humans, there is no substitute for fossils when it comes to trying to picture the anatomy and behavioral capabilities of our early relatives," said Mark Weiss, program officer at the National Science Foundation, which partially funded the research. "The late Miocene-early Pliocene is a particularly important era as it was roughly at that time that our ancestors and those of the chimpanzee parted company. Each new fossil helps to tell a bit more of the story of these early stages in human origins."

Several Ethiopian dig sites have yielded hominid fossils from that time period. The Gona site was previously known for the excavation of the oldest stone tools ever discovered. Plant and animal fossils indicate that these early humans lived in a low-lying area with swamps, springs, streams, and volcanic centers, with a mosaic of woodlands and grasslands.