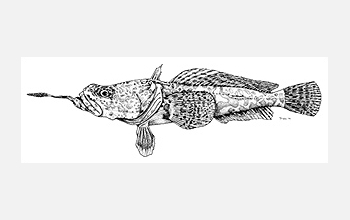 An Ohio University researcher who netted four species of fish previously unknown to science during a National Science Foundation (NSF) Antarctic research cruise says the discoveries confirm his hypothesis that the continent's frigid seas are a world-class evolutionary laboratory.

"Antarctica is under-appreciated as an evolutionary site," argues Joseph Eastman, an anatomist who made his discoveries aboard the Nathaniel B. Palmer, an icebreaker of the NSF's polar research fleet. "The oceanic waters surrounding the continent are a natural evolutionary laboratory comparable to the Hawaiian Islands or Lake Baikal in Russia."

Eastman said his research indicates the waters appear to have been the site of geologically recent "adaptive radiation" as a single stock of fish--known as notothenioids--evolved to fill ecological niches that unrelated species would otherwise occupy. This is the only known example of an adaptive radiation in marine fish, according to Eastman.

Fossil evidence indicates that a variety of different species occupied ecological niches earlier in geological time, when Antarctic waters probably were considerably warmer. But Eastman said that many scientists erroneously assume that because the relatively shallow coastal waters around the southern continent are now so cold, they also must be relatively barren and uninteresting in an evolutionary sense.

The variety of species in the waters of the Antarctic shelf, which typically are no more than 500 meters deep, differs sharply from similar, more temperate waters, such as in the Delaware Bay. In those waters, Eastman noted, there is a great diversity of species on the bottom and at different levels of the water column.

In Antarctica, 95 species of notothenioids, all derived from bottom-dwellers without swim bladders, dominate all habitats. Over evolutionary time, some notothenioids have experienced an increase in body fat and are able to live permanently in the water column, rather than on the bottom.

Based on his 20 years of research and his new discoveries, Eastman said that "as far as bottom habitats are concerned, sponge beds in Antarctica are the equivalent of coral reefs in the tropics; sites of high fish diversity."

Polly Penhale, who oversees medical and biological research for the U.S. Antarctic Program, said that Eastman's findings indicate that "future research is likely to lead to a greater appreciation of biodiversity in the polar regions."

Eastman's discoveries--which include the first identification of a new species in the genus Artedidraco in 80 years--occurred almost by chance. Eastman studies the anatomy of buoyancy and how it evolved in Antarctic fishes. "It wasn't my intention to look for new species," he noted.

During two separate research seasons, rocky bottoms ripped nets so that only half of 20 trawls in the Ross Sea reaped large numbers of fish. But the four new species were discovered in those 10 successful trawls.

Note: Drawings of two of the new species are available in digital form. Call the media contact listed below.