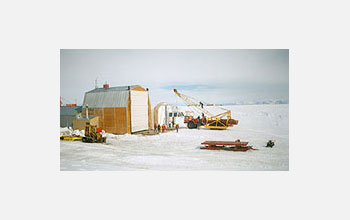 The building near McMurdo Station, NSF's logistics hub in Antarctica.

The National Science Foundation (NSF), through its Office of Polar Programs, supports long-duration balloon (LDB) flights in Antarctica to conduct astrophysical experiments. Circling the continent on unique stratospheric winds at altitudes of roughly 37 kilometers (22.9 miles) for periods of up to 31 days, experiments operate in an area that is almost free of atmospheric interference. For some experiments, this provides scientists with conditions equivalent to flight aboard a satellite or the space shuttle, at much lower cost.

As an international zone under the Antarctic Treaty, balloons can be launched, flown and recovered anywhere on the continent without diplomatic complications experienced in other areas of the globe.

Since 1988, NSF and NASA have developed techniques for flying and recovering large balloon payloads -- in the range of two tons -- at altitudes of roughly 37 kilometers (22.9 miles) for extended periods.

Over the past decade there have been LDB flights in most Antarctic research seasons -- roughly mid-December through mid-January -- frequently with two balloons being flown during the season.

In 1998, the Balloon Observations of Millimetric Extragalactic Radiation and Geophysics (BOOMERANG) experiment obtained the first detailed images of the universe in its infancy. The images revealed the structure that existed in the universe when it was a tiny fraction of its current age and 1,000 times smaller and hotter than it is today.

NASA operates the National Scientific Balloon Facility in Palestine, Texas, which supports balloon flights worldwide. Antarctic experiment packages are prepared at the NSBF, but must be sent to McMurdo Station via NSF's cargo facilities in Port Hueneme, Calif. through Christchurch, New Zealand.

The Antarctic research season runs from October through February. However, regional weather does not normally stabilize until early December. Because recovery aircraft are more in demand near the end of the season, the Antarctic balloon launch window lasts only about six weeks. By early February, icebreakers have created a channel through the sea ice that that rings the continent to allow a supply ship to bring in heavy equipment for the next season. This cargo often includes truckloads of helium for the following year's balloon flights.