Reappearance of Missing Genetic Information Poses Exception to the Rule

Code is hiding but not lost 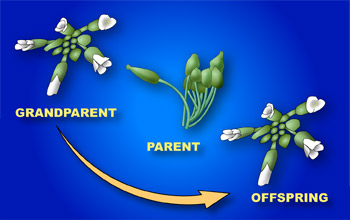 Researchers have discovered that “missing” genetic information unexpectedly reappears in later generations. By poring over the genome of the model plant, Arabidopsis thaliana, scientists at Purdue University found specific genetic information present in a “grandparent” and “grandchild,” even though it was seemingly absent in the “parent.”

The study is featured in the March 24 issue of the journal Nature.

For more than a century, a basic tenet of inheritance has dictated that an organism’s genome passes directly from one generation to the next in a predictable manner—from grandparents—to parents—to children.  Now, Susan Lolle, Robert Pruitt and their colleagues have shown this cardinal rule of inheritance is sometimes broken. The scientists reached their conclusion by tracking how genetic information passes through multiple Arabidopsis generations.  In violation of current genetic theory, they found a significant percentage of the plant grandchildren had genetic information identical to that of the grandparent, but not the parent.

But how could the child acquire genetic information from its grandparent, if the parent had lost it?  Lolle and Pruitt postulate that the “lost” genetic information securely resides outside the standard genome and is only retrieved under particular circumstances when it may be beneficial to restore genomic sequences back to an ancestral state.  So, the information was not lost, but rather “hidden”—from scientists anyway.

How does the plant benefit by accessing a cache of its ancestor’s genomic information?  Lolle said, “This ancestral information acts like a reserve genetic template that plants can make use of should living conditions become less ideal.”  She continued, “In this way, we think plants get a ‘second chance’ to win the genetic lottery.”

Like any good scientist, Lolle was skeptical of her own results and hesitant to believe something so novel was occurring.  For years she reasoned there were trivial explanations for what she was seeing.  Eventually, however, Lolle could no longer discount the evidence, so she meticulously repeated experiments and verified results, ruling out all explanations afforded by conventional dogma.  The data became irrefutable—the genetic information was “skipping” a generation.

It’s a nearly heretical theory.  Indeed, the implications will have scientists pondering old results anew.  As Rita Teutonico, the National Science Foundation program manager who oversees this work said, “We knew the project was ambitious, but these results challenge us to re-think some genetic paradigms and demonstrate that some very forward thinking ideas warrant investigation.”  Teutonico continued, “This result illustrates the benefits of the NSF’s support of bold, high-payoff science.”