But Earth's elusive mantle is a near miss 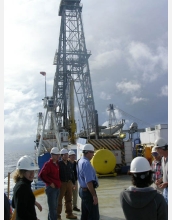 Scientists drill into ocean crust from aboard the vessel JOIDES Resolution.

Scientists affiliated with the Integrated Ocean Drilling Program (IODP) and seeking the elusive "Moho"--the boundary, which geologists refer to as the Mohorovicic discontinuity, between Earth's brittle outer crust and its hotter, softer mantle--have created the third deepest hole ever drilled into the ocean bottom’s crust.

Scientists had hoped to drill into Earth's mantle, but found instead that their efforts had missed the mark, they now believe by less than 1,000 feet. The X that marks the spot, they now think, is located a short distance to the side of the drill hole.

From the ocean drilling vessel, JOIDES Resolution, the researchers recovered rocks from more than 4,644 feet (1416 meters) below the sea floor that will provide valuable information about the composition of the Earth. And despite coming up short, “This is one of the best efforts to date,” said Rodey Batiza, NSF program director for ocean drilling, “to drill into ocean crust and find mantle. It will provide important clues on how ocean crust forms.”

Scientists aboard two consecutive oceanographic cruises, known as Legs 304 and 305, drilled into the Atlantis Massif, located at the intersection between the Mid-Atlantic Ridge and the Atlantis fracture zone. The central portion of this region is made up of a shallower sea floor feature than the area around it.  That “core,” scientists believed, would turn out to be composed of rocks that make up Earth’s lower crust and upper mantle, providing a first-ever opportunity to sample the mantle.

The cored rocks, however, are clearly part of Earth’s crust.

Benoit Ildefonse of the Université Montpellier, a co-chief scientist on the expeditions, said, “Deep coring in the ocean crust is a challenging endeavor, and has been a long-term goal for geoscientists since the late 1950s.  Post-cruise research [on samples recovered by the drilling] will expand our knowledge of processes at slow spreading mid-ocean ridges, a key component of the Earth’s dynamics.”

Co-chief scientists Ildefonse, Donna Blackman of the Scripps Institution of Oceanography, Barbara John of the University of Wyoming and Yasuhiko Ohara of the Hydrographic and Oceanographic Department of Japan, and IODP scientist Jay Miller of Texas A&M University led the expeditions, which drew scientists from IODP’s 18 member countries.

“The rocks cored,” said John, “have compositions that represent some of the deepest crust ever sampled.  They’re unique in ocean drilling records, and provide an unprecedented opportunity to learn about formation of Earth’s crust.”

More drilling to locate the mantle may take place in the same location; at the end of the expedition, the drill hole was open and in good condition, IODP scientists said, and ready to be drilled deeper.

Miller said scientists have a largely preconceived idea of how the Earth evolved, based on previously acquired geophysical data. “The types of rocks we recovered show that this interpretation is oversimplifying many of the features of the ocean’s crust. Each time we drill a hole, we learn that Earth’s structure is more complex.  Our understanding of how the Earth evolved is changing accordingly.”