At the Molecular Level, the Predator is the Prey 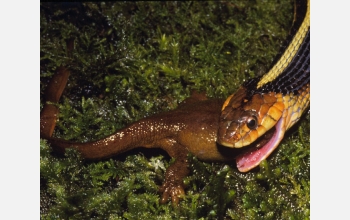 Some garter snakes have evolved the ability to eat toxic newts.

An evolutionary arms race between predatory garter snakes and their newt quarry is turning out to be something of an illusion. At the molecular level, another battle rages. And in this second, miniature realm, it's the newt who's the aggressor.

Biologists at Indiana University Bloomington (IUB), Utah State University and the University of Utah present evidence in this week's Nature that a toxin produced by the rough skinned newt, Taricha granulosa, has forced several evolutionary changes in the garter snake Thamnophis sirtalis or, more specifically, in the snake nerve-cell protein that endures the newt toxin's attacks.

"Few systems allow us to follow evolutionary change as it happens," said Sam Scheiner, program director in the National Science Foundation (NSF)'s division of environmental biology, which funded the research.  "Because of the very strong evolutionary pressure in the relationship between these newts and garter snakes, we can observe this process close up.  It's a unique opportunity to see co-evolution in action."

Embedded in the surface of garter snake nerve cells is tsNa(V)1.4, a tube-shaped protein that allows sodium ions to flow into the cell. When nerve cells' ability to move sodium in and out is hampered, paralysis and death can result. Tetrodotoxin (TTX), a powerful paralytic poison concentrated in the newts' skin, can bind to garter snake nerve-cell channels and prevent sodium ions from flowing freely.

"These channels are absolutely fundamental to every aspect of nerve and muscle function and are highly specific gateways for sodium ions," said IUB biologist Edmund Brodie III, one of the paper's coauthors. "If the channels change too much or in the wrong way, they can't perform their basic, everyday functions. Sodium channel genes in different vertebrates are virtually identical to each other, but not in these snakes. We're finding a molecular arms race is driving rapid and repeated changes in the gene within this group of beasts."

For TTX to bind successfully to the sodium channel, the toxin needs something to bind to. At this moment in the garter snake's evolutionary history, TTX infiltrates a hole on tsNa(V)1.4's surface, binding to an aromatic amino acid and causing enough of a change in the sodium channel's shape to impair its function. Three of the four Pacific Northwest snake populations the scientists examined have evolved some degree of resistance to TTX by making this aromatic amino acid harder for TTX to grasp--or by removing it altogether.

One-thirtieth of the TTX normally found in a T. granulosa newt is enough to kill the average human being. The only organisms on Earth that can eat T. granulosa newts and survive are some T. sirtalis garter snakes. TTX is a defensive compound found in some puffer fish, octopuses and primitive chordates. It is used in low concentrations to treat people addicted to heroin or morphine. It's also the "zombie" drug used by Haitian voodoo ritualists.

Despite its action at the molecular level, the evolution of TTX in some organisms is viewed by ecologists as a defense mechanism. In the case of T. granulosa newts and T. sirtalis garter snakes, the interaction has evolved into a lethal contest of toxification/detoxification one-upsmanship.

The evolution of new traits often happens one of two ways, either by altering existing genes or by changing patterns and amounts of their activities, or expression. The Nature report shows that snakes' ability to detoxify TTX involves changes in the sodium channel gene.

"Ecological arms races that go on between predator and prey are really driven at the molecular level," Brodie said.

Edmund Brodie Jr. and Peter Ruben of Utah State University and Esther Fujimoto of the University of Utah School of Medicine also contributed to the report. Fujimoto was at Utah State while the research took place. The research was also funded by grants from the National Institutes of Health.