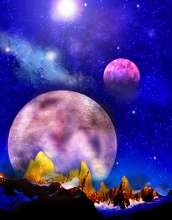 An artist's rendition of the Upsilon Andromedae planetary system.

Planets are thought to be common in the universe. But planetary systems that can harbor life may well be the exception, rather than the rule. According to a study funded by the National Science Foundation and published in today's issue of the journal Nature, it's just too easy for them to engage in the kind of family strife that makes life impossible.

Our own solar system is actually pretty harmonious by cosmic standards, explains the study's principal investigator, Northwestern University physicist Frederic A. Rasio. One big reason why Earth can support life is that our planet has had liquid oceans and a comparatively constant climate for billions of years now. And one big reason it's been able to maintain that constancy is that Earth and all the other major planets of our solar system have spent those billions of years in stable, near-circular orbits around the Sun.

But over the past decade, says Rasio, more than 160 planets have been identified in orbit around other stars, with new ones being found all the time. And most of those extrasolar planets are giant, Jupiter-sized bodies that follow elongated elliptical orbits around their parent stars. In the process, presumably, their gravity has badly stirred up the orbits of any smaller, Earth-like planets, which would seem to make stable oceans and climates out of the question.

In their new study, Rasio and his colleagues from Northwestern and the University of California, Berkeley, suggest an explanation for how these systems got into such a state. By combining observational data with computer simulations of the multi-planet system Upsilon Andromedae, the researchers have traced its current configuration back to an earlier episode when one planet wandered too close to its siblings. The result was a very quick but fierce period of orbital turmoil that ended with the offending planet being ejected into interstellar space. The remaining planets settled into relative peace, but with orbital patterns that retain the scars of childhood family dysfunction to this day.

For more information see the news releases from Northwestern University and the University of California, Berkeley.