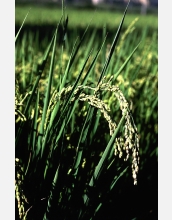 Researchers have sequenced the genome of rice blast fungus, providing them with key information to tackle the devastating rice blast disease. The genetic blueprint of more than 11,000 genes of Magnaporthe grisea--the culprit pathogen--will allow researchers to study host-pathogen interactions of this disease at the molecular level, leading to new ways to defeat the fungus.

Rice blast disease currently devastates rice yields, destroying enough grain to feed 60 million people. For decades, growers around the world have worked to control the disease with costly fungicides. To date, the fungus--through its ability to mutate and better attack plants--has beaten both chemical treatments and genetic resistance developed by plant breeders in some types of rice. A strategy to eliminate the disease would increase world rice production by more than 10 percent.

North Carolina State University researcher Ralph Dean and his colleagues published this sequencing work in the April 21 issue of Nature. The research marks the completion of the first draft sequence of a plant pathogen.

By combining the genetic information of the pathogen with the previously published rice genome, scientists will have new insight into the molecular mechanisms by which the fungus infects plants and adapts to thwart the host's defenses. Additionally, the knowledge gained from studying rice blast disease will benefit other investigations focused on the molecular mechanisms of plant-microbe interactions. For example, it is now known that this fungus uses a new class of receptor to distinguish rice from all other plants.

As Dean said, "Decoding the rice blast genome is a great achievement which couldn't have come at a better time. Rice is the primary source of nutrition for much of the world, particularly Southeast Asia. Following the devastating tsunami, every effort will be needed to improve rice production, and in the long-term, having the genome sequences of both rice and rice blast will greatly aid in this effort."

Dean's work was supported in part by the National Science Foundation's (NSF) Microbial Genome Sequencing Program. A joint effort between NSF and the United States Department of Agriculture (USDA), the program funds genome sequencing projects of importance to the nation's food and fiber supply.