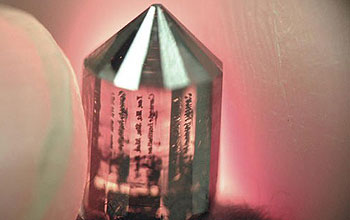 In addition, the team has made colorless single-crystal diamonds, transparent from the ultraviolet to infrared wavelengths with their CVD process.

Most HPHT synthetic diamond is yellow and most CVD diamond is brown, limiting their optical applications. Colorless diamonds are costly to produce and so far those reported are small.  This limits general applications of these diamonds as gems, in optics, and in scientific research.  Last year, the Carnegie researchers found that HPHT annealing enhances not only the optical properties of some CVD diamond, but also the hardness. Using new techniques, the Carnegie scientists have now produced transparent diamond using a CVD method without HPHT annealing.

"High-quality crystals more than three carats are very difficult to produce using the conventional approach," said scientist Russell Hemley,  who leads the diamond effort at Carnegie. "Several groups have begun to grow diamond single crystals by CVD, but large, colorless, and flawless ones remain a challenge. Our fabrication of 10-carat, half-inch, CVD diamonds is a major breakthrough."

The results were reported at the 10th International Conference on New Diamond Science and Technology, Tsukuba, Japan, on May 12, 2005, and will be reported at the Applied Diamond Congress in Argonne, Ill., May 18, 2005.

"The rapid synthesis of large, single-crystal diamond is a remarkable scientific achievement, and has implications for a wide range of scientific and commercial applications," said David Lambert, program director in the National Science Foundation (NSF)'s earth sciences division, which funded the research.

To further increase the size of the crystals, the Carnegie researchers grew gem-quality diamonds sequentially on the six faces of a substrate diamond plate with the CVD process. By this method, three-dimensional growth of colorless single-crystal diamond in the inch-range is achievable.

Finally, new shapes have been fabricated with the blocks of the CVD single crystals.

"The diamond age is upon us," said Hemley.