Lucky break reveals it's a girl 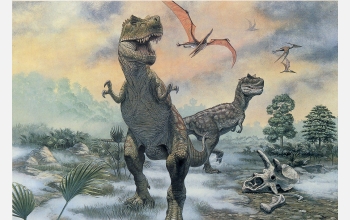 Two Tyrannosaurus rex adults are alert and ready to hunt.

In a literal "lucky break" that exposed unusual bone tissue lining the hollow cavity of a Tyrannosaurus rex leg bone, paleontologists at North Carolina State University have determined that a 68 million-year-old T. rex fossil from Montana is that of a young female, and that she was producing eggs when she died.

In a report published in the June 3, 2005, issue of the journal Science, Mary Schweitzer, a paleontologist at NCSU and the North Carolina Museum of Natural Sciences, and her colleagues state that the presence of this particular tissue provides evidence of the dinosaur's gender, and a connection between dinosaurs and living birds.

Schweitzer believes the unusual tissue inside the bone is medullary bone: a thin layer of highly vascular bone that is found in present-day female birds only during ovulation. This estrogen-linked reproductive bone tissue forms inside the hollow leg bones of the birds and persists until the last egg is laid, at which time it is completely resorbed into the bird's body. Its formation is triggered by an increase in estrogen levels, and the temporary tissue provides the calcium necessary to form eggshells.

"The discovery of medullary bone in T. rex is important because it allows us to figure out the gender of a dinosaur," says Schweitzer. "It also adds to the support linking birds and dinosaurs, and shows that their reproductive physiologies may have been similar. We hope to be able to identify features in dinosaurs that will help determine the gender of other fossils, and lead to information about their herd structure or family groups."

Medullary bone is only found in present-day female birds; no other egg-laying species (including crocodiles, the other living dinosaur relative) produces the tissue naturally.

"Schweitzer's recognition of medullary tissues in T. rex is very important because it indicates a close relationship between dinosaurs and birds," said Enriqueta Barrera, program director in the National Science Foundation (NSF)'s earth sciences division, which funded the research. "Birds and dinosaurs may have mobilized calcium and shelled their eggs in a similar manner. The discovery also provides us with the means to identify gender in dinosaurs."

Because the dinosaur tissues didn't look exactly like pictures published of medullary bone in living birds like chicken and quail, Schweitzer's team compared the tissue from the femur of the T. rex to that taken from leg bones of more primitive ratites, or flightless birds, such as ostriches and emus. These birds share more similar features with dinosaurs than do other present-day birds. An ostrich and an emu in different stages of their laying cycles were selected, at times when medullary bone was present.

Since only females produce medullary bone, its presence in the T. rex femur indicates that this fossil was a female, and probably one who died toward the end of her laying cycle. "From a biological perspective, the tissue is another link between dinosaurs and living birds," said Schweitzer.