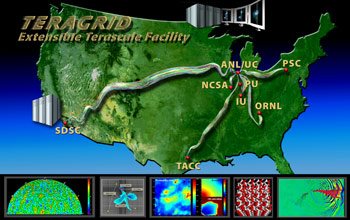 TeraGrid strives to be the most comprehensive, distributed infrastructure for scientific research.

The National Science Foundation (NSF) has made a five-year, $150 million award to operate and enhance the Extensible Terascale Facility (ETF)--also called "TeraGrid." Researchers and educators around the country can now access a range of computing resources that will accelerate advances in science and engineering.

"Many new users from a range of scientific communities will now have access to sophisticated IT applications and computational tools. Over time, these applications will be customized to the needs of the individual or community," said NSF Director, Arden L. Bement, Jr.

TeraGrid--built over the past 4 years--is the world's largest, most comprehensive distributed cyberinfrastructure for open scientific research. Through high-performance network connections, TeraGrid integrates high-performance computers, data resources and tools, and high-end experimental facilities around the country.

"TeraGrid unites the science and engineering community so that larger, more complex scientific questions can be answered. Solving these larger challenges will, in turn, motivate the development of the next generation of cyberinfrastructure. This is a win-win situation consistent with NSF's mission to keep science and engineering at the frontier," continued Bement.

The scientists and engineers responsible for TeraGrid operations will work closely with researchers whose science requires powerful computing resources. For example, researchers using TeraGrid are exploring functions of decoded genomes, how the brain works, the constitution of the universe, disease diagnosis, and real-time weather forecasting to predict the exact locations of tornado and storm threats. TeraGrid will also help engineers design better aircraft via realistic simulations of new designs.

The new TeraGrid award includes $48 million to provide overall architecture, software integration, operations and coordination of user support. The University of Chicago will lead this effort under the guidance of Charlie Catlett, director of the TeraGrid project and former chair of Global Grid Forum. An additional $100 million will provide for operation, management and user support of TeraGrid resources at eight resource provider sites.

TeraGrid's creators and collaborators are developing a "science gateways" initiative to allow more researchers and educators access to TeraGrid capabilities, tailored to their own communities, through their own desktop computers. Science gateway projects are aimed at supporting access to TeraGrid via web portals, desktop applications or via other grids. An initial set of 10 gateways will address new scientific opportunities in fields from bioinformatics to nanotechnology as well as interoperation between TeraGrid and other grid infrastructures.

"In the past several years, the community has learned that reliable, sustainable cyberinfrastructure requires both close collaboration among organizations making their resources available to scientists and engineers through grid technologies, and a critical mass of people responsible for the overall enterprise," said Catlett. "A focused coordination team ensures that users experience a coherent system and provides a way to organize a large number of resource providers."

George Karniadakis, a professor of Applied Mathematics at Brown University, has long been a leader in applying NSF computing resources to a variety of fluid dynamics problems. Karniadakis now uses computational resources at four different TeraGrid sites simultaneously. "The TeraGrid is a distributed supercomputer, a system with potentially unlimited capability for us. For the first time, we can simulate cardiovascular processes in the entire arterial tree," he said.

Thomas Jordan, director of the Southern California Earthquake Center at the University of Southern California, leads an effort to combine computational models from several disciplines to shed new light on the consequences of earthquakes. "TeraGrid is providing us with the computational resources to deploy an entirely new technology for seismic hazard analysis," Jordan said.

"We fully expect TeraGrid to catalyze the next generation of scientific discoveries," said Deborah Crawford, acting director of NSF's Office of Cyberinfrastructure. "Simply put, breakthrough science and engineering depends on a first-class cyberinfrastructure."

"TeraGrid is helping build a national infrastructure for computational research," according to Guy Almes, NSF program manager who oversees the project. "TeraGrid enables scientists and engineers to both be more productive in their research and education as well as enjoy doing this work with cutting-edge tools while working closely with peers around the world."