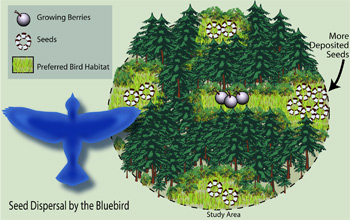 Seeds were more often found in the central clearings of connected patches than in isolated ones.

Wildlife corridors--clear tracts of land intended to help maintain biodiversity by allowing animals to move between otherwise isolated natural areas--may also aid stationary plants in the same way. A study at an outdoor experimental landscape in S.C., has found that berry eating bluebirds transfer more of the plants' seeds between habitats connected by corridors than between those that are unconnected.

The study, which appears this week in the journal Science, is important because it suggests that greenways in urban and suburban communities help plants as well as animals.

Habitat fragmentation poses a widespread threat to biodiversity by disrupting the dispersal of organisms, said Doug Levey, a zoologist at the University of Florida and lead author of the paper. "Corridors--narrow strips of habitat that join patches of similar habitat--are thought to provide a solution by restoring dispersal of species among patches," he said.

According to Levey, the experiment's scale is unique in wildlife corridor research, which has tended to focus on smaller sites. The researchers used a computer model to extrapolate records of bluebird movement from small areas to large landscapes--painting a much broader picture than available through observation alone.

"We examined the effect of habitat corridors on long-distance dispersal of seeds by birds, and tested whether small-scale (less than 20 meters) movements of birds could be 'scaled up' to predict dispersal of seeds across hundreds of meters," Levey said.

Levey and his colleagues collaborated with the U.S. Forest Service to set up the experimental landscape, which lies in the Savannah River Site National Environmental Research Park, a 482-square-mile federally protected research area on the S.C.-Ga. state line.

The biologists placed wax myrtle branches with ripe berries in the central clearings, marking the berries with a harmless florescent dye so that they could track the berries' whereabouts. The researchers also placed seed traps under bluebird perches in both the connected and isolated central clearings. Using the florescent markers, they were able to identify seeds that came from plants in the central patches.

Levey said that the success of the research demonstrates promise for studies aimed at predicting long-distance movements of elusive animals such as bears, wolves and panthers. "The study shows that models based on easily observed behaviors indeed can be used to predict landscape-level processes."

Co-authors of the Science paper are Ben Bolker, also at UF; Joshua Tewskbury, of the University of Washington; Sarah Sargent, of Allegheny College in Pennsylvania; and Nick Haddad, of North Carolina State University.