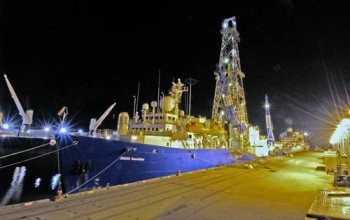 The drillship JOIDES Resolution at the dock in Mobile, Ala.

New evidence has been found linking underwater catastrophic sand avalanches to rapid sea-level changes in deep waters of the Gulf of Mexico, according to marine geologists affiliated with the Integrated Ocean Drilling Program (IODP).

By analyzing sediment cores, IODP scientists are reconstructing the history of a sea-floor area formed approximately 20,000 years ago, when sea level fell so low the Texas shoreline shifted almost 100 miles to the south. The data are important to reconstructing climate change history and gathering insights into the development and placement of natural resources.

"These new results will help scientists better understand the processes that occur with shifts in sea level," said Rodey Batiza, program director in NSF's division of ocean sciences, which supports IODP. "What is preserved in ancient ocean sediments can shed light on sea-floor processes going on today."

Expedition scientists are studying areas known as basins, which "are the ultimate repositories for sediments transported by the Brazos and Trinity Rivers [that empty into the Gulf of Mexico]," said Peter Flemings of Pennsylvania State University. "Over the past 120,000 years, the basins accumulated enough sand and mud to cover the entire city of Houston with a layer 20 feet thick."

During the last glacial period when more of Earth's water was locked up in glaciers and sea level was lower, sediments discharged by rivers such as the Brazos and Trinity formed beaches and deltas near the continental shelf's edge. Catastrophic underwater sand avalanches, called turbidity currents, carried the sediments into the deep waters of the Gulf of Mexico, where they accumulated in bowl-shaped basins.

Carlos Pirmez, an expedition geologist affiliated with Shell International in Houston, said, "basins are now buried thousands of meters beneath the Gulf of Mexico sea floor, and likely host billions of barrels of oil and gas. Sediment records we acquire from the basin off Texas shores will boost our understanding of how these deeply buried reservoirs are formed."

Expedition scientists plan to obtain detailed measurements of changes in sediment and fluid properties to enable prediction of turbidity currents, which can carry large amounts of sand and mud in suspension, sometimes for hundreds of miles, at speeds up to 70 miles per hour near the seabed.

Jan Behrmann, a scientist at Germany's University of Freiburg, emphasizes that, "The goal of this expedition was not to explore or drill for oil, which lies much deeper than the sediments we recovered. In the next several months, we will analyze sediment samples and gain an understanding of when and how turbidites form. We will then have a better picture of why and where these important [petroleum] deposits are formed."

The expedition, which concludes July 10, is taking place aboard the JOIDES Resolution, a riserless drillship operated for IODP by the JOI Alliance: the Joint Oceanographic Institutions, Texas A & M University, and the Lamont-Doherty Earth Observatory of Columbia University.

IODP's initial 10-year, $1.5 billion science plan is primarily supported by the U.S. National Science Foundation and Japan's Ministry of Education, Culture, Sports, Science, and Technology. Other support comes from the European Consortium for Ocean Research Drilling and the People's Republic of China Ministry of Science and Technology.