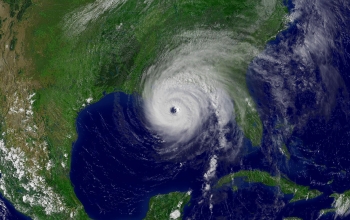 Hurricanes have grown significantly more powerful and destructive over the past three decades, according to atmospheric scientist Kerry Emanuel of the Massachusetts Institute of Technology.

In his new analysis of tropical hurricane records, which he reports online today in the journal Nature, Emanuel finds that both the duration of the storms and their maximum wind speeds have increased by about 50 per cent since the mid-1970s. Moreover, this marked increase in the energy release has occurred in both the north Atlantic and the north Pacific Oceans.

"It's an innovative application of a theoretical concept, and has produced a new analysis of hurricanes' strength and destructive potential," says Jay Fein, director of the National Science Foundation (NSF)'s climate dynamics program, which funded the research. And that analysis, in turn, "has resulted in an important measure of the potential impact of hurricanes on social, economic and ecological systems,"

Indeed, as Emanuel himself says, "the near doubling of hurricane's power over the period of record should be a matter of some concern, as it's a measure of the [future] destructive potential of these storms."

Also of concern, he says, is that the increases in storm intensity are mirrored by increases in the average temperatures at the surface of the tropical oceans, suggesting that this warming is responsible for the hurricanes' greater power. Since hurricanes depend on warm water to form and build, Emanuel warns that global climate change might increase the effect of hurricanes still further in coming years.

In addition, he says, recent research suggests that global tropical hurricane activity may play a role in driving the oceans' circulation, which in turn has important "feedbacks" to regional and global climate.

Fluctuations in tropical hurricane activity "are of obvious importance to society," he adds, "especially as populations of affected areas increase. Hurricanes account for a significant fraction of damage, injury and loss of life from natural hazards, and are the costliest natural catastrophes in the United States. As the human population in coastal regions gets denser, the damage and casualties produced by more intense storms could increase considerably in the future."