The result could be an even faster acceleration of climate warming 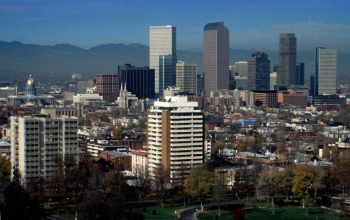 Trapped by an inversion, a thick blanket of pollution, or brown cloud, hangs over Denver

Rising fossil fuel emissions may actually decrease the Earth's natural capacity to absorb carbon dioxide from the atmosphere, according to a newly published study--which means that the warming of Earth's climate could accelerate even faster than scientists have anticipated.

The study, which was posted on-line this week by the journal Proceedings of the National Academy of Sciences, is based on a new computer simulation of the global carbon cycle developed by Inez Fung of the University of California at Berkeley and her colleagues, with support from the National Science Foundation (NSF)'s climate dynamics program.

Fung and her coworkers put particular emphasis on modeling how carbon dioxide emissions affect the strength and capacity of the environment's natural carbon repositories, including plants, soil, rain, clouds, bacteria, phytoplankton and oceans. The researchers also used observations from the past two centuries to project the coming century.

Their major finding was an inverse relationship between the rate at which carbon dioxide is emitted from the burning of fossil fuels like coal, oil and gas, and the capacity of land and ocean to absorb that carbon dioxide: the faster the emissions, the less effective were the carbon sinks.

There are a number of reasons for this, Fung explains. In the ocean, for example, carbon dioxide from the atmosphere mixes fairly rapidly into the upper layers, down to about 100 meters or so. Then from there it slowly leaks into the deep ocean, where it will stay sequestered for centuries. But rising global temperatures warm the upper layers and make the ocean more stratified, so that the carbon dioxide has a tougher time mixing further downward.

On land, meanwhile, climate warming tends to dry out the tropics and reduce plant growth there, which in turn reduces the rate of photosynthesis and carbon uptake.

Taking all the effects together, says Fung, "our finding implies that carbon storage by the oceans and land will lag farther and farther behind as climate change accelerates with growing carbon dioxide emissions, creating an amplifying loop between the carbon and climate systems."

The team's model used the low range of temperature increases for the 21st century, predicting a rise of 1.4 degrees Centigrade for a "business-as-usual" fossil fuel emission scenario. Overall, said Fung, the model agrees with others predicting large ecosystem changes, especially in the tropics.

"Fung's study demonstrates the necessity of studying the Earth's environment as an integrated system," said Jay Fein, director of NSF's climate dynamics program, which funded the research. "Her conclusions about the complex relationships between the planet's carbon cycle and its climate have important implications for future climate warming."