Novel structure made from cell components could deliver drugs, genes on command 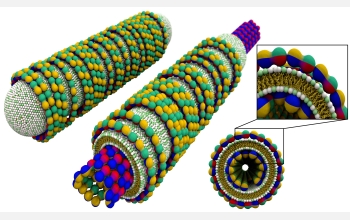 An up-close look at the new "smart" bio-nanotubes.

By combining one natural component of a cell with the synthetic analog of another component, researchers at the University of California, Santa Barbara, have created a nanoscale hybrid they call the "smart bio-nanotube": a novel structure that could one day become a vehicle for ultra-precise drug or therapeutic gene delivery.

The nanotubes are "smart" because they can open or close at the ends, depending on how the researchers manipulate the electric charge on the two components. So in principle, a nanotube could encapsulate a drug or a gene, and then open on command to deliver the cargo where it would have the best effect.

The tube's components play roles similar to skin and bone. The "skin" is a soap-bubble-like arrangement of molecules known as a lipid bilayer, akin to the bilayer that forms the cell's protective outer membrane. The "bone" is a hollow, cylindrical structure known as a microtubule, which is ubiquitous in the cell's internal cytoskeleton, the system of nanoscale struts and girders it uses for internal transport, structural stability and many other purposes. The researchers have found that when they combine the two components and control the conditions properly, open or closed bio-nanotubes will assemble themselves spontaneously.

The discovery resulted from a collaboration between the laboratories of UCSB materials scientist Cyrus R. Safinya, and UCSB biochemist Leslie Wilson. Their work was funded by the National Science Foundation's materials research division and is reported in the Aug. 9 issue of The Proceedings of the National Academy of Sciences. The report also appeared on-line in the PNAS Early Edition.