Latest data expand the molecule’s importance in the cell 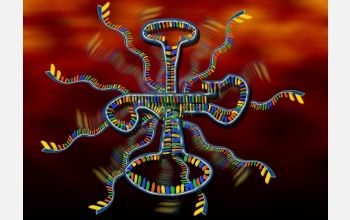 The genetic material RNA has a broad range of cellular functions.

For decades, the "other" genetic material, RNA (ribonucleic acid), was thought to play a supporting role to its more famous counterpart, DNA. After all, protein production requires DNA-based genetic information to be converted to transient RNA molecules, which cells use as blueprints to build the proteins, in a process that relegates RNA to its subsidiary reputation. More recently, scientists have come to realize the range of RNA functions is much broader than as mere middle men in protein production. Indeed, RNA also mediates chemical reactions and regulates cellular processes.

Now, articles in the Sept. 2 issue of the journal Science provide a rich resource for scientists to study the diversity and function of a special class of RNAs and demonstrate yet another role for the mysterious molecule beyond protein production.

In one, a group at the University of Delaware used a new technique to identify more than 77,000 so-called "small RNAs" from the model plant, Arabidopsis thaliana, and created a publicly accessible database to hold the information. In a second article, a Yale University team determined the structure of an RNA molecule that aids in chemical reactions and found it had characteristics resembling proteins that perform similar reactions, raising the possibility that RNA-based molecules could have served many roles in Earth's earliest history.

Over the past 10 years, a number of research teams have further explored a discovery that certain small RNAs constitute a potent set of molecules that can regulate cellular processes including development, defense against disease-causing microbes and stress response. Although several thousand small RNAs have been identified from diverse plant and animal systems, the technology was not available to catalog the full set in any organism.

Pamela Green and Blake Meyers and their coworkers at the University of Delaware capitalized on a new technique developed by Solexa, Inc., Hayward, Calif., to characterize the small RNAs in Arabidopsis. The new data provide the foundation to elucidate the identity, regulation and function of small RNAs in both plants and animals. They have made the data accessible via a user-friendly, web-based, public database that scientists around the world can use to compare Arabidopsis genome sequences to the cache of newly discovered small RNAs.

Joanne Tornow, a National Science Foundation (NSF) program manager said, "Understanding the molecular underpinnings of biological processes is essential to our goal of comprehending life's complexity. These new results will be of tremendous benefit to the scientific community." The work was supported through NSF's "Small Grants for Exploratory Research" program, which sponsors high-risk research that may lead to rapid, innovative advances in science and engineering.

Further demontrating RNA's varied functions, Yale's Mary Stahley and Scott Strobel focused on an RNA molecule that uses magnesium ions to catalyze chemical reactions that occur during the protein production process. They determined the 3-D structure of the magnesium-RNA complex and discovered that the RNA had a similar structure to proteins that use magnesium to catalyze reactions in a like manner.

"The knowledge gained from this work will be useful in future efforts to design and engineer new RNA-based molecules that can perform reactions in biochemical nanoengineering," said Parag Chitnis, NSF program manager for the project.