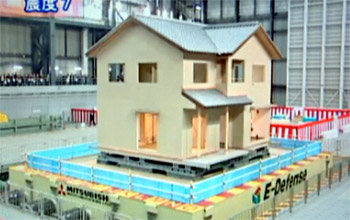 As part of a full week of activities in Japan, U.S. National Science Foundation (NSF) Director Arden L. Bement, Jr.,  and Japanese deputy education, science and technology minister Tetsuhisa Shirakawa signed an agreement on Sept. 11 to enhance both countries' efforts to work together to combat the devastation of natural disasters.

The memo endorses collaborative research, sharing of research activities through E-Defense and NEES cyberinfrastructure and the exchange of research results. The programs will also exchange scientists and engineers, including early career researchers and students.

The Japanese earthquake-testing facility came on line in January 2005 on the 10th anniversary of the Kobe earthquake. E-Defense allows the testing of structures subjected to simulated high-intensity earthquakes. The massive shake table platform measures 65 feet by 50 feet (20 meters by 15 meters) and will accommodate a four-story building weighing 1,200 tons. Bement tours E-Defense, which is funded by Japan's Ministry of Education, Culture, Sports, Science and Technology (MEXT), on Sept. 13.

On Sept. 10, in an event hosted by the Japan Agency for Marine-Earth Science and Technology, Bement celebrated delivery of the deep ocean-drilling vessel Chikyu--the Japanese word for Earth--which will be used in the Integrated Ocean Drilling Program (IODP). Chiku can drill deeper into the Earth than any other scientific drilling ship.

IODP is a long-term international effort to unravel the mysteries of the Earth's structure and history through analyses of marine sediments and rocks. Launched in October 2003, IODP is the product of collaboration among the United States, Japan and the European Union. NSF and MEXT serve as co-leaders of IODP.

During his visit, the NSF director will also participate in two symposiums, including plenary remarks at a forum on "Science and Technology in Society," which provides a mechanism for open, informal discussions among senior science and technology leaders. Attendees will have an opportunity to discuss how to best implement research advances while addressing new ethical, safety and environmental concerns.

Bement will speak on "Imagining an Innovative Future" at the U.S.-Japan Innovation Summit, sponsored by the U.S. Council on Competitiveness and Innovation in Nagoya. The summit fosters dialogue among private and public sector leaders from both nations to encourage collaboration.