Sea-surface temperatures are also on the rise 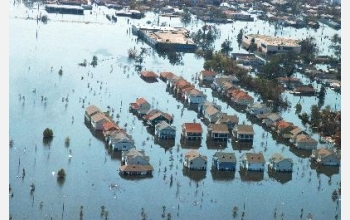 New Orleans houses are swamped by floodwaters after Hurricane Katrina.

The  number of Category 4 and 5 hurricanes worldwide has nearly doubled over the past 35 years, according to a study by researchers at the Georgia Institute of Technology and the National Center for Atmospheric Research (NCAR). The change occurred as global sea-surface temperatures have increased over the same period.

Atmospheric scientist Peter Webster of Georgia Tech's School of Earth and Atmospheric Sciences, along with scientists Greg Holland of NCAR and Judith Curry and Hai-Ru Chang of Georgia Tech, studied the number, duration and intensity of hurricanes worldwide from 1970 to 2004.

Results of the research will appear in the Sept. 16 issue of the journal Science.

Category 4 hurricanes have sustained winds from 131 to 155 miles per hour (mph); Category 5 systems, such as Hurricane Katrina at its peak over the Gulf of Mexico, pack winds of 156 mph or more.

"Category 4 and 5 storms are also making up a larger share of the total number of hurricanes," said Curry. "These hurricanes made up about 20 percent of all hurricanes in the 1970s, but over the past decade they accounted for about 35 percent."

This trend is happening, the scientists say, as sea-surface temperatures around the globe are rising--anywhere from 0.50 to 1.0 degree Fahrenheit, depending on the region--over hurricane seasons since the 1970s.

The North Atlantic averaged eight to nine hurricanes each year in the past decade, compared to the six to seven before. Category 4 and 5 hurricanes in the North Atlantic have increased at an even faster clip: from 16 between 1975 and 1989 to 25 between 1990 and 2004. That constitutes a 56 percent increase.

Research published in July in the journal Nature and also funded by NSF reached a similar conclusion. In that issue, scientist Kerry Emanuel of the Massachusetts Institute of Technology reported finding an increase in the duration and power of North Atlantic and North Pacific hurricanes.

Whether such increases are due to human-induced global warming is still uncertain, said Georgia Tech's Webster. "We need a longer data record of hurricane statistics, and we need to understand more about the role hurricanes play in regulating the heat balance and circulation in the atmosphere and oceans."

Webster is working to determine the role of hurricanes in regulating Earth's climate. "The thing they do more than anything is cool the oceans by evaporating the water and then redistributing the oceans' tropical heat to higher latitudes," he said. "But we don't know a lot about how evaporation from the oceans' surface works when the winds get up to around 100 miles per hour, as they do in hurricanes."

Webster adds that this understanding is crucial to connecting trends in hurricane intensity to overall climate change.

"If we can understand why the world sees about 85 named storms a year and not 25 or 200, for example, then we might be able to say it is consistent with a global warming scenario. Without that understanding, a forecast of the number and intensity of tropical storms in a future warmer world would be statistical extrapolation."