Scientists See Light That May Be From First Stars in Universe 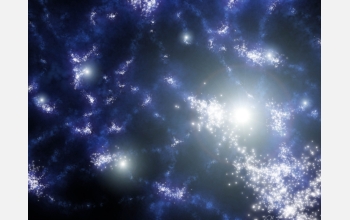 An artist's conception of the first stars in the universe

Scientists using the National Aeronautics and Space Administration's (NASA's) Spitzer space telescope say they have detected infrared radiation that may have come from the earliest objects in the universe.

The light is too distant and feeble for the Spitzer to resolve individual sources; the science team, based at NASA's Goddard Space Flight Center in Greenbelt, Md., compares it to the glow of a distant city seen at night from an airplane.

But after data analysis funded in part by the National Science Foundation (NSF), the scientists believe the radiation is giving them a glimpse of the infant universe more than 13 billion years ago, when the fading embers of the big bang were just coming back to life.

The Goddard team says it's possible the light is coming from hot gas falling into the first black holes to form in the universe. Or, the light could be coming from the very first stars, the long-hypothesized Population III stars. (Population I and II stars, named by order of their discovery, comprise the familiar types of stars we see at night.)

If that is the case, theory suggests these first stars were likely over 100 times more massive than Earth's sun. This would have made them extremely hot, bright, and short-lived, with each one burning for only a few million years. By now, however, fierce ultraviolet light emitted by these Population III stars would have long since been stretched to lower energies by the universe's expansion--or "redshifted"--which is why the Spitzer telescope is currently picking up that light in infrared wavelengths.

The science team, led by Alexander Kashlinsky of Science Systems and Applications, Inc., has published their results in the Nov. 3 issue of the journal Nature.