From Mississippi to Wyoming, Plants Once Danced to Fast-Changing Climate Tune 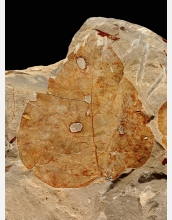 Scientists have discovered the first fossil leaves from a period of rapid global warming 55 million years ago. The leaves tell a story about plants alive during that time: a fast-changing climate allowed southern-dwelling trees and shrubs to move north in a hurry. In fact, plants spread from the Gulf Coast to Wyo.--a distance of some 1,000 miles--in 10,000 years or less.

"This study shows that vegetation responded rapidly to a major change in climate during the PETM. Plants that previously were common much farther south migrated northward," said Enriqueta Barrera, program director in the National Science Foundation's (NSF) Division of Earth Sciences, which funded the project.

Scott Wing, a paleobiologist at the Smithsonian Institution's National Museum of Natural History in Washington, D.C., led the research team. He said plant ranges changed as quickly during the PETM as they did when glaciers retreated from the northern continents in the past 20,000 years.

Similar rapid changes in plant life might be expected in the future as a result of human-induced global warming, Wing said, if habitat destruction doesn't block the paths by which plants disperse to their preferred climate zone. "No two events are ever exactly the same," he said, "but the history of life on this planet has a lot to tell us about our possible future."

According to Wing, the PETM was caused by a massive release of carbon into the atmosphere and ocean, making it an analog for the global warming that is expected as humans add carbon dioxide to the atmosphere, primarily by burning fossil fuels.

The new results were taken from fossil leaves and pollen found in the Bighorn Basin of northwestern Wyo. "The Bighorn Basin is a well-known treasure trove for fossils because enormous amounts of sediment were deposited there as the Rocky Mountains rose," said Wing. "Those sediments and the fossils they contain are now exposed in spectacularly eroded badlands."

Fossil mammals and chemical analysis of rocks were key to determining the age of the leaf fossils, which are the first discovered from the PETM interval.

Plant fossils from before and after the PETM document the typical northern forests of the time, including relatives of dawn redwood, alder, sycamore, walnut and sassafras. Fossils from the PETM itself show that--for a short time--the area supported an entirely different type of vegetation, one dominated by members of the bean family and including warmth-loving relatives of poinsettia, sumac and paw-paw.

Some of the plant fossils found in the PETM in Wyo. were known from rocks of similar ages in Miss., La., and Texas. The southern plants occurred throughout the PETM in Wyo., then disappeared, presumably unable to survive there as the global climate cooled at the end of the event, said Wing.

The return to a cooler climate brought a different set of plants to Wyo. Relatives of linden and wingnut emigrated from Europe to North America across Arctic land bridges during the peak warmth, then established themselves in Wyo. forests after the global heat wave passed. Scientists see a similar pattern of migration in animals that lived during the PETM, suggesting that they, too, moved in concert with rapid climate change.