Recipients include agriculture scientist, transplant surgeon and other distinguished researchers 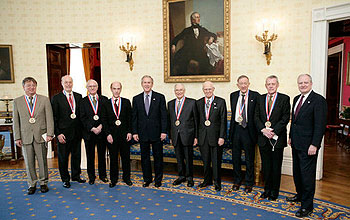 President George W. Bush with the recipients of the National Medal Science at the White House.

The National Science Foundation congratulates the recipients of the nation's highest scientific honor, the 2004 National Medal of Science, as announced by the president on Nov. 14. We celebrate not only the achievements of these eight pioneers, but also the scientific and technological advances they helped to generate. We are especially pleased that six of the eight have received public funding through NSF at some point in their careers. In that way, the public shares indirectly in their honor - as both sponsors and beneficiaries of their work.

The award was established in 1959 and is administered by NSF for the president. Awards programs exist primarily to honor the recipients and recognize their dedicated work that often occurred in obscurity. But they also serve to inspire and enlighten others. The National Medal of Science helps remind us why we invest in those who quietly push the frontiers of knowledge. Even though we often don't know where that investment will lead, we do know it can bring many benefits to society. That is why NSF continues to fund the cutting edge of research. We can't afford not to.

NSF joins the American people in congratulating these heroes of science and engineering, who are advocates for the American public, seeking ways to improve both our understanding of our world and the way we live within it.

Recipients of the 2004 National Medal of Science*

* The President officially presented the awards on Feb. 13, 2006, in a White House ceremony.