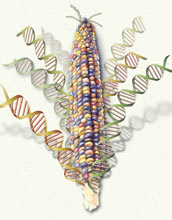 From its original domestication over 6,000 years ago by the Indians of modern Central America to Columbus' diary entry of 1492 noting its 'very good taste,' history is rife with examples of corn's usefulness to society.  In fact, Indian corn would have been on the menu of the first Thanksgiving meal almost 400 years ago, while sweet potato, cranberry sauce and pumpkin pie would not.

In modern times, sequencing the maize (corn) genome has been considered a daunting task because of its large size and complex genetic arrangements. With two smaller plant genomes now complete--rice and the model laboratory plant Arabidopsis--scientists are now stalking the 2.5 billion bases of maize's genetic code.

A team of university and private laboratory researchers has been awarded a total of $32 million from the National Science Foundation (NSF), United States Department of Agriculture (USDA), and Department of Energy (DOE) to sequence the maize genome.

"The knowledge gained from this project will ultimately lead to better corn yields," said NSF Director, Arden L. Bement, Jr. While reflecting on the importance of this new project, Bement recalled the words of corn geneticist and Nobel laureate Barbara McClintock: "I know [my corn plants] intimately, and I find it a great pleasure to know them." "We will certainly have an even more intimate knowledge of corn when this project is completed," Bement said.

Richard Wilson, lead investigator for the project at Washington University said, "In many ways, this sequencing effort is comparable to that of the human genome as the two are nearly the same size. However, the dispersed arrangement of genes coupled with the many segments of repeated DNA sequence represent unique challenges for this effort."

"Having a genome sequence for maize will advance our understanding of the biology of important but poorly understood processes such as hybrid vigor and asexual plant production. This investment is yet another step along the road in using genomics to transform the plant sciences," remarked James Collins, head of the biological sciences directorate at NSF.

The interdisciplinary team will draw on the successes of many other completed sequencing efforts, including some previously sequenced sections of the maize genome as well as the rice and human genomes, to ensure the speed and accuracy of the project. All sequence data produced by the team will be deposited immediately into GenBank, a public repository for genome sequence data.

"Knowing the genetic sequence of maize will help researchers to increase yields, reduce inputs, and develop more disease-resistant varieties," said Joseph Jen, under secretary of agriculture for research, education and economics, USDA. "More broadly, it will also hold clues to improve the growth and development of other related grass crops, such as wheat and barley."

Maize ranks among the world's major grain crops and dominates American agriculture. In 2004, 81 million acres of corn were planted with a production value of over $23 billion. Corn ranks tops among U.S. exports, with an estimated 2 billion bushels shipped out of the country in 2004.

"This project will provide an essential overview of the structure and function of genes that define the corn plant," said Daniel Rokhsar, lead investigator for the project at the DOE Joint Genome Institute. "This important information will provide vital clues on how the actual genetic sequence can be useful to accelerate corn's improvement as well as many of its plant relatives."

Corn is not only grown for food and feed, it is converted to a myriad of processed food products--literally thousands of products in the typical supermarket contain corn. Corn is also an important material for many industrial purposes and products including rubber, plastics, fuel and clothing.

Raymond L. Orbach, Director of DOE's Office of Science said maize is a classic system for studying complex genomic structure, organization and function and its high quality genetic map will serve as the foundation for studies that may lead to improved biomass and bioenergy resources from related plant species.