People of Persistence: A Journey Beyond Disability 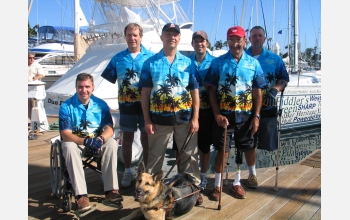 The crew members of the B'Quest before their departure

This past summer, a crew of four sailors challenged by such physical disabilities as paraplegia and blindness sailed with their able-bodied captain in the 2,225-mile Trans-Pacific yacht race from southern Calif. to Hawaii. Representing Challenged America, a charitable sailing-education and rehabilitation organization, the team placed fourth in their class of able-bodied competitors and in the top third overall.

On Dec. 8, crew member Urban Miyares, a Challenged America co-founder and Presidential Point of Light awardee, will come to Washington, D.C. to tell his trek and discuss how new technologies made the voyage possible.

Students and professors at San Diego State University developed many of the technologies as part of a long-running NSF program, the Engineering Senior Design Projects for Persons with Disabilities. Professor Karen May-Newman and several students will showcase some of the devices.

The lunch and talk will be held at the National Press Club, and space is limited. Please RSVP to olpa-events@nsf.gov by Dec. 5, 2005.

About the speaker:
Urban Miyares is a nationally-recognized blinded and multi-disabled Vietnam veteran, motivational/inspirational speaker and lecturer, entrepreneur, published writer and newspaper columnist, inventor and patent holder, media personality, world-class athlete, and president of the Disabled Businesspersons Association--a national, volunteer-based, public charity founded in 1985 to assist in the rehabilitation and self-employment of disabled veterans and others with disabilities.