A Fish of a Different Color 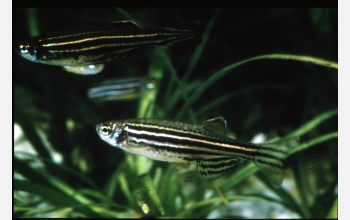 Until now, the genetics underlying human skin pigmentation have remained a mystery. But while studying the zebrafish--a fish common to household aquariums and research laboratories--a team of interdisciplinary scientists found a gene that plays a major role in human coloration.

Besides unraveling some of the mysteries of human variation, the research, which is featured on the cover of the Dec. 16 issue of Science, has implications for understanding a host of human diseases including cancer, diabetes and rickets.

Keith Cheng and his colleagues at Pennsylvania State University (PSU) first determined the gene, called golden, regulated pigmentation in the golden zebrafish. After identifying golden in the fish, the scientists used an online database to find the gene's counterpart in humans. Such an approach was not uncommon to Cheng, who has long used zebrafish as a model organism to study cancer because of its rapid reproduction cycle and many genes in common with humans.

When compared to the typical zebrafish, the golden variant is lighter in color and has pale stripes. The team also found the golden zebrafish had fewer, smaller melanosomes, the cellular organelles that contain the pigment melanin. The PSU group then proved the golden gene was responsible for the differences between the two zebrafish variants.

People of European descent have the same melanosome characteristics as the lighter-pigmented fish--that is, fewer and smaller--suggesting to Cheng and his colleagues that a golden-like gene might also be involved in human coloration. By searching a public database of human genome information, they did indeed find a very similar gene in humans. And in fact, a specific change in the human counterpart to golden was prevalent in individuals from lighter-skinned European populations, while the gene without the change corresponded to the darker pigmentation of West Africans and East Asians.

The gene encodes a protein located in the melanosome membrane that appears to regulate the flow of calcium in and out of that organelle and may play a role in melanin production.

The finding was an unexpected offshoot of NSF-supported basic cancer research using zebrafish that Cheng began a decade ago.