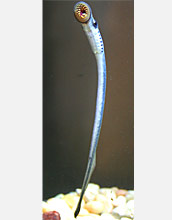 Studying the lamprey immune system is providing insight into our own defense mechanisms.

Researchers recently discovered that the sea lamprey, a modern representative of ancient jawless vertebrates, fights invading pathogens by generating up to 100 trillion unique receptors.  These receptors, referred to as VLRs, are proteins and function like antibodies and T-cell receptors, sentinels of the immune system in all jawed vertebrates, including humans.

The results, reported in the Dec. 23 Science by Zeev Pancer at the University of Maryland Biotechnology Institute's Center of Marine Biotechnology in Baltimore, and his colleagues, proved ancient vertebrates--both jawed and jawless--used more than one strategy to develop an immune system that would recognize and defend against their myriad bodily invaders.

They studied a type of immune defense mechanism called "adaptive," because as the name implies, it adapts to the incredible number of pathogens in the environment by producing 100 trillion potentially different receptor proteins in order to recognize at least one of the invader's molecules.  Recognition of the pathogen is a first step in mounting a defensive response against it.

Some 450 million years ago, both jawed and jawless vertebrates began relying on cells called lymphocytes to support the burgeoning adaptive immune system.  But within the lymphocytes from the two types of animals, very different mechanisms evolved to reach very similar ends. Comparing the two immune systems is the basis of Pancer's research.

As in jawed vertebrate immune systems, he found, the diversity of the VLR proteins occurs when thousands of genetic modules go through multiple rounds of random mixing, insertion and deletion.  Each new VLR gene functions as a blueprint for the corresponding VLR protein.  Thus, through a mixture of chance and necessity, both jawed and jawless vertebrates stay ahead of the pathogens in their ever-evolving battle.

To test the adaptability of this alternative immune mechanism, the researchers immunized lampreys with the anthrax-causing bacterium, a pathogen not normally encountered by fish of any type.  Within four weeks, the lamprey immune system had recognized the spores as foreign and responded by producing anthrax-specific VLR proteins that circulated throughout its body.

"By understanding the development and role of the lamprey immune system we can learn about our own immune system and how it functions," said Pancer.  "Comparing these two systems is an unparalleled way to look at a basic biological process and also may hold promise for novel diagnostic tools."

Pancer credits the National Science Foundation, which supported this work, as enabling new discoveries that have the potential to unravel such mysteries of biology.