All In a Week's Work

New report tells which doctorate holders work the most 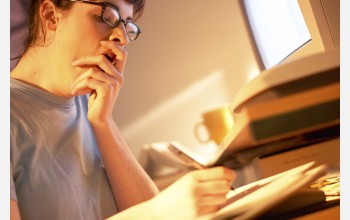 According to newly released data, biologists and agricultural scientists work the most hours.

Also, the report said, when the worker's household includes non-adult children, women declared shorter work weeks than did men who had the same number of children. In households with no children, women and men work equal numbers of hours.

Thomas B. Hoffer and Karen Grigorian, of the University of Chicago's National Opinion Research Center, analyzed data from NSF's 2003 Survery of Doctorate Recipients taken for the reference week of Oct. 1 of that year. The survey looked at 530,962 doctorate holders working in three broad sectors, including education, which was primarily university level teaching and research, industry and government. Educators averaged 50.6 hours of work for the week, while those in industry averaged 47.6 hours. Those employed by federal, state or local governments worked the fewest hours, averaging 45.2 per week.

As for the postdocs? They reported working 50.3 hours per week on average -- "less than the nontenured tenure-track faculty, but more than non-tenure track individuals, and not significantly different from tenured faculty," the survey says.

Although the differences between employment sectors and fields of work boil down to an extra hour or so a couple of days a week, the authors say the figures have only a 5 percent chance of being random variations.

Some highlights of the report:

NSF published the InfoBrief, All In a Week's Work: Average Work Weeks of Doctoral Scientists and Engineers, in Dec. 2005.