2,056-mile round trip sets the stage for optimal science at the new polar research station 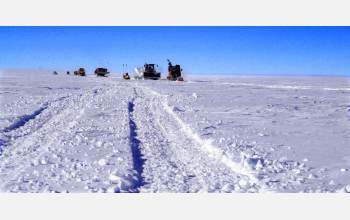 A caravan trekked nearly 110 tons of cargo from McMurdo station to the South Pole.

A four-year project to test the possibility of transporting scientific equipment and material by ground from a field station located on Antarctica's coastal edge to another deep in the continent's center has ended in success. The National Science Foundation (NSF) convoy returned to NSF's McMurdo Station on Jan. 14, after logging more than 2,056 miles (3,300-kilometers) during its roundtrip.

Officials said the successful traverse demonstrates that using tracked vehicles to tow cargo is a viable alternative for supplying the world's most remote scientific research station. Currently, all cargo and personnel arrive at NSF's Amundsen-Scott South Pole Station by aircraft.

"This historic achievement sets the stage for fuller realization of the scientific potential of the new South Pole Station," said Karl A. Erb, director of NSF's Office of Polar Programs (OPP).

NSF manages the U.S. Antarctic Program, which supports and coordinates all U.S. science conducted on the southernmost continent.

The tracked vehicles staffed by a crew of seven men and one woman, towed sleds of cargo, fuel, and life-support modules left McMurdo on Nov. 11, 2005. During the 1028-mile (1654-kilometer) trip to the Pole, the tractor-train ascended more than 9,300 feet (2,900 meters) and crossed numerous crevasse fields from sea level to the top of the Polar Plateau.

In each of the past three years, traverses have covered steadily increasing distances between McMurdo and the Pole, encountering such difficulties as crevasse fields and enormous areas of soft snow that delayed their passage. This year the traverse reached its goal and delivered nearly 110 tons (99,790 kilograms) of cargo. The payload, which included two tractors, is equivalent to 11 loads of equipment and supplies aboard an LC-130.

"Reaching the Pole safely and returning to McMurdo over the same track represents an outstanding accomplishment," said OPP's logistics manager, David Bresnahan. "Delivering cargo to Pole on this traverse is beyond our expectations for a proof of concept."

The overland transport capability removes two major engineering and logistical constraints--cargo size and weight-- that have limited the design of large scientific instruments and infrastructure. Until now, now everything at the Pole, including the new South Pole station and the large telescopes there, had to be designed in individual sections that could be transported in the cargo bay of LC-130 aircraft and then reassembled on site.

The ground transport mechanism is also well-suited for the delivery of the large quantities of fuel needed at the station. Moreover, by providing an alternative to air supply, the traverse will free up planes for the support of scientific research in remote parts of the continent. Aircraft will always be a key component of the Antarctic logistics stream because they can deliver personnel and time-sensitive cargo quickly to essentially any part of the continent.

With completion of the proof-of-concept traverse, NSF will purchase equipment to implement the full-scale traverse capacity for resupply of the South Pole station as recommended by OPP's Office Advisory Committee.