Discovery of small, rocky, extrasolar world suggests such planets may be common 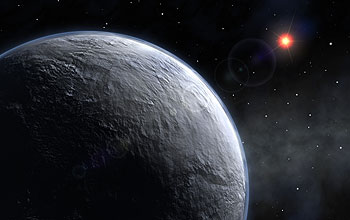 B-roll tapes of NSF animations are available for media use. Contact Cliff Braverman at (703) 292-7756 or cbraverm@nsf.gov.

The archived webcast, research paper, biographies and other event materials can be found at: http://www.nsf.gov/news/newsmedia/planet06/

Using a relatively new planet-hunting technique that can spot worlds one-tenth the mass of our own, researchers have discovered a potentially rocky, icy body that may be the smallest planet yet found orbiting a star outside our solar system.

The discovery suggests the technique, gravitational microlensing, may be an exceptional technology for finding distant planets with traits that could support life.

"This is an important breakthrough in the quest to answer the question 'Are we alone?'" said Michael Turner, assistant director for the National Science Foundation (NSF) mathematical and physical sciences directorate. "The team has discovered the most Earth-like planet yet, and more importantly, has demonstrated the power of a new technique that is sensitive to detecting habitable planets. It can probe a much greater portion of our galaxy and is complementary to other techniques."

Located more than 20,000 light years away in the constellation Scorpio, close to the center of our Milky Way galaxy, planet OGLE-2005-BLG-390Lb is approximately five-and-a-half times the mass of Earth.

Orbiting a star one-fifth the mass of the sun at a distance almost three times that of Earth's orbit, the newly discovered planet is frigid: the estimated surface temperature is -364 degrees Fahrenheit (-220 degrees Celsius).

Although astronomers doubt this cold body could sustain organisms, researchers believe gravitational microlensing will bring opportunities for observing other rocky planets in the "habitable zones" of stars - regions where temperatures are perfect for maintaining liquid water and spawning life.

The discovery, authored by 73 collaborators from 32 institutions, appears in the Jan. 26 issue of the journal Nature.

OGLE (Optical Gravitational Lensing Experiment) project telescopes first observed the lensing event on July 11, 2005. In an attempt to catch microlensing events as they occur, OGLE scans most of the central Milky Way each night, discovering more than 500 microlensing events per year. But to detect the signature of low-mass planets, astronomers must observe these events much more frequently than OGLE's one survey per night.

So, when OGLE detected the July 11 lensing, its early warning system alerted fellow astronomers across the globe to microlensing event OGLE-2005-BLG-390 (for the 390th galactic bulge OGLE discovered in 2005). At that point, though, no one knew a planet would emerge.

"The only way to realize the full scientific benefit of our observations is to share the data with our competition," said co-author Bohdan Paczynski of Princeton University, who along with Andrzej Udalski of Warsaw University Observatory and their colleagues co-founded OGLE in 1997.

The telescopes of PLANET (Probing Lensing Anomalies NETwork) and RoboNet tracked the July 11 episode to completion, providing additional data and ultimately discovering the presence of a previously unknown planet. These telescopes collect observations more frequently in an attempt to detect the microlensing signature of planets.

Ironically, when preparing the final report, the researchers discovered that during its test runs, the new MOA (Microlensing Observations in Astrophysics) telescope, MOA-2, had taken additional measurements of the lensing event. The 6-foot (1.8-meter) aperture telescope has a wider field-of-view than the OGLE telescope, enabling it to observe 100 million stars many times per night. MOA-2 is one of several recent and future advancements that gravitational microlensing proponents hope will greatly increase the number of Earth-like planet discoveries.

OGLE also has plans to increase the field-of-view of its own telescope, and other microlensing groups are proposing to build a new telescope in South Africa. They have also proposed a space mission to see planets as small as Mars as well as free-floating planets that no longer orbit a host star.

"The new discovery provides a strong hint that low-mass planets may be much more common than Jupiters," said co-author and PLANET researcher David Bennett of the University of Notre Dame. Most extrasolar planets found so far have been Jupiter-sized.

"Microlensing should have discovered dozens of Jupiters by now if they were as common as these five-Earth-mass planets. This illustrates the primary strength of the gravitational microlensing method: its ability to find planets of low-mass," Bennett said.

Telescopes cannot resolve the details of the magnified image, but they do notice a peak in light intensity, and when a planet is present around the closer star, the planet's gravity adds a small peak of its own.

Astronomers can use those features to determine how large the planet is and how far away it is from its star. This method is 50 times more likely to detect planets of approximately twice the mass of Jupiter than it is to detect planets closer to the mass of Earth. Even relatively tiny, low-mass objects can give a strong peak signal if alignment is perfect.

Of the more than 150 planets discovered to date, almost all were discovered using a different technique, the radial velocity method. Stars with planets can wobble from the effect of their planets' gravity, and astronomers can use the wobble to determine the size and orbit of the objects. While incredibly effective, existing technology utilizing this method can find only large, Jupiter-like planets or smaller planets that orbit too close to their host stars to harbor life.

Because the newly discovered planet is only the third astronomers have detected using gravitational microlensing and already they have found a small, rocky body, the researchers believe there is a strong likelihood that rocky planets may be even more common than their gas-giant brethren. This prediction would agree with one of the models for solar system formation, core accretion, which suggests that small, rocky, "failed Jupiters" should be far more common than the massive gaseous planets.