Scientists use genomics to reveal secrets of ocean microbes 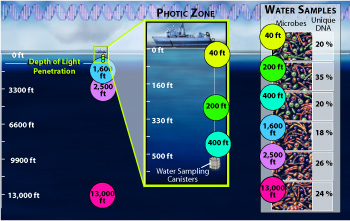 Researchers sequenced the genomes of ocean microbes living in the Pacific ocean.

Scientists have sequenced and compared the genomes of planktonic microbes living throughout the water column in the Pacific Ocean. The pioneering study yielded insight into the specialization of microbial communities at each depth--ranging from 40 to more than 13,000 feet.

"By reading the information stored in the genomes of entire microbial communities, we can begin to measure the pulse of this marine ecosystem," said MIT's Ed DeLong, who led the research team. "These new DNA sequences from microbial communities will help us paint the picture of how that world works and provide important details on the players involved and their biological properties and activities."

DeLong and his coworkers report their findings in the Jan. 27 issue of the journal Science.

The interdisciplinary research team sequenced a total of 64 million base pairs, or subunits, of DNA from microbes and viruses they collected at each depth. In the process, they discovered thousands of new genes from novel and ecologically abundant microbes and found evidence of frequent gene exchange between organisms. The study also revealed variations in genetic composition at different depths--including differences among genes involved with carbon and energy metabolism.

"Although they're small, these tiny microbial species are the engines of the biosphere, and in large part drive the cycles of matter and energy in the sea," said DeLong.

Microbes near the ocean surface, for example, had more genes devoted to taking in iron, a major element necessary for growth in that zone. Genomes from organisms below the ocean's deepest and darkest layers displayed almost epidemic levels of DNA associated with "jumping genes," or pieces of DNA that can move from one part of the genome to another.

Microbial ecologists have had fairly rudimentary tools and techniques to bring to bear on their research to date, DeLong said. But now with the ability to sequence vast amounts of DNA in shorter time periods, the science is pressing forward.

DeLong and his colleagues saw a unique opportunity for a "proof-of-principle" study by combining new microbial genomic profiles with decades of data collected at Station ALOHA, a National Science Foundation (NSF)-funded Hawaii Ocean Time-series (HOT) research site. Since 1988, HOT investigators have catalogued information about the biologic, chemical and physical parameters of the surrounding ocean, making it one of the most comprehensively characterized sites in the seas.

"Station ALOHA is a well-studied region of the open ocean with regard to plankton ecology, biogeochemistry and physical oceanography, making it an ideal collection site for this work," said Philip Taylor, director of NSF's biological oceanography program, which co-supported the work.

"The HOT program provided the opportunity to place new information about the depth distribution of genes in an environmental context. This approach transformed what we know about the ecology and evolution of microbial life in the ocean," he said.

"Plants and animals are twigs on the tree of life when compared to the diversity of microbes that surround us," said Matthew Kane, director of NSF's microbial observatories and microbial genome sequencing programs, which also supported the work. "By approaching ecology through genomics, we are starting to get a truly paradigm-shifting view of all life on the planet."

A better understanding of these microbial communities and how their genes allow them to interact with the environment underpins the larger study of biology. "The open ocean is Earth's largest and, perhaps, most complex ecological community," said collaborator David Karl, a biological oceanographer at the University of Hawaii. "The diversity and depth-defined characteristics of marine microbial communities revealed unexpected genomic patterns and metabolisms--our findings are just part of why it's such an exciting time for all ecologists."

The researchers will continue to investigate the significance of these and other findings in more detailed studies.

In addition to NSF, the U.S Department of Energy Microbial Genomics Program and the Gordon and Betty Moore Foundation provided support for the work.