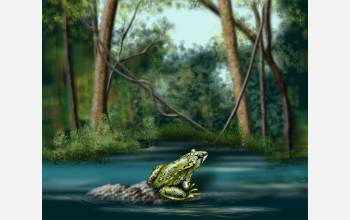 Something wicked this way comes, if you're a frog or salamander living near El Cope, Panama.

An outbreak of an infectious disease called chytridiomycosis, attributed to the fungus Batrachochytrium dendrobatidis, has infected and caused rapid die-offs in eight families of Panamanian amphibians, scientists report in this week's issue of the Proceedings of the National Academy of Sciences (PNAS).

A survey of amphibian populations in central Panama has uncovered a case of chytridiomycosis that is rapidly radiating outward from western Panama into the El Cope region, spreading from northwest to southeast from Costa Rica toward Colombia.

The fungus has been implicated in the decline of more than 40 amphibian species in Central America and 93 such species worldwide. But few researchers have been able to detect and monitor the presence of the fungus before a disease outbreak, and then witness the impact of an epidemic as it occurred, said zoologist Karen Lips of Southern Illinois University Carbondale, lead author of the report.

"We anticipated the eastward movement of the fungus, and chose a fungus-free study site near a previously infected area," she said. "Indeed, the fungus found its way there, and when it did, it quickly caused local amphibian extinctions and devastated frog and salamander biodiversity."

Pathogens, or disease-causing microbes, "rarely cause extinctions in the species they infect," said James Collins, assistant director of biological sciences at the National Science Foundation (NSF). Collins is on leave from Arizona State University, and is a co-author of the paper. "There are only a few examples where we think a pathogen resulted in extinction of a species in an area. This is one of them."

The rockhopper frog, for example, which lived along El Cope riverbanks, disappeared completely within one month.

Chytridiomycosis wasn't detected at the El Cope study site, said Collins, until Sept. 23, 2004, when scientists found the first infected frog. From then through mid-Jan. 2005, the fungus went on a rampage, killing so many frogs within 4 months that amphibian abundance was reduced by more than 50 percent.

Dead frogs included individuals in 38 species (57 percent of the amphibian species at the site). All but three of the dead amphibians were infected with chytridiomycosis, and six of seven samples from substrates like stream boulders tested positive for the fungus, the researchers report.

"None of the 1,566 individuals of 59 amphibian species sampled before Sept. 2004, was infected with this fungus," said Lips. "Our results demonstrate that the prevalence of the fungus very rapidly went from zero to high at this site."

The timing of the outbreak, said Collins, "indicates that chytridiomycosis is rapidly moving southeastward, allowing us to predict its entry into amphibian communities in central Panama."

When the disease emerges at a site, it is thought to spread through a combination of frog-to-frog and environment-to-frog transmission. In the lab, some species of amphibians can carry the infection for up to 220 days before dying.

The die-off at El Cope occurred during the peak of the rainy season. Many mountain-dwelling frogs in the New World tropics make their way to water bodies to breed during the region's prolonged rainy season, thereby transmitting the waterborne fungus.

"Our findings definitively link the appearance of chytridiomycosis to amphibian population declines," said Lips. The area had no evidence of climate anomalies in 2004; its temperature and rainfall patterns were similar to those found in long-term records. "These results support a model of amphibian declines in which this fungus enters and quickly spreads through a community with no previously infected individuals," Lips said.

The researchers predict the loss of many more amphibian species from the region, most likely from mountainous areas directly east of the study site.

To the west, the fungus has already left countless dead amphibians in its wake.

Other authors of the paper are Forrest Brem, Roberto Brenes and John Reeve of Southern Illinois University Carbondale; Ross Alford of James Cook University in Townsville, Queensland, Australia; Jamie Voyles, Cynthia Carey and Lauren Livo of the University of Colorado in Boulder; and Allan Pessier of the Zoological Society of San Diego.

NSF and the Bay and Paul Foundation funded the research.