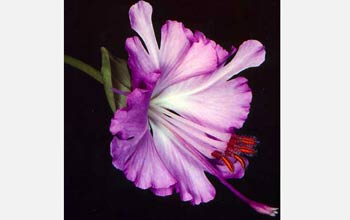 A trip to the neighborhood florist is proof positive that flowers have an array of scents to pique our senses, but researchers are also investigating the myriad other functions of these aromas--known to scientists as "plant volatiles." Typically liquid substances that evaporate easily at average temperatures, plant volatiles play important ecological roles from attracting pollinators to repulsing herbivores and from destroying microorganisms to dispersing seed.

Moreover, humans have used plant volatiles since antiquity in the production of perfumes, in medicines, and as spices that serve dual roles of flavoring agent and food preservative. Plants reported to have antimicrobial activity include chilies, clove, garlic, mustard, sage, rosemary and thyme.

According to articles in the Feb. 10 issue of the journal Science, which has devoted a special section to the topic, despite the importance of volatiles in a range of human affairs, until recently little was known about how plants make the smelly substances, which has limited the ability to make them in the laboratory or understand their roles in plant life. Improvements in analytical tools, though, such as gas chromatography, mass spectrometry, mapping metabolic pathways, and genomics, have led to new knowledge about how the compounds are synthesized and appreciation for the complex strategies plants have evolved to survive and reproduce in a diverse array of habitats.

"Rapid advances, like the ones we are seeing in the field of plant volatiles, are possible in part because of interdisciplinary research teams that are taking knowledge gained from genomics programs such as Arabidopsis 2010 and applying it to separate but related research," said Parag Chitnis, a manager involved in NSF's plant volatiles research program.

Chitnis points in particular to the NSF-supported work of University of Michigan's Eran Pichersky, who collaborates with scientists at Purdue University and Salk Institute to study plant volatiles production using genetics, analytical chemistry, structural biology and biochemistry. The team has identified a number of plant genes involved in volatiles production and reviews in the journal what is known the diverse biochemical pathways plants have adopted to manufacture them.

The National Science Foundation's Arabidopsis 2010 Project aims to determine the function of all genes in the laboratory workhorse plant Arabidopsis thaliana by the year 2010. It is expected that Arabidopsis will be a model for resource and tool development and application for all plants.

New knowledge of when and how plant volatiles are synthesized now affords us a better understanding of the roles they play in plant growth and development, flavor, and nutrition. This important basic research will someday allow us to control the production of these compounds, and to transfer the ability to make certain compounds from one plant species to another. Such breakthroughs may increase natural plant resistance to pests, improve flavors and nutritional values, and boost seed and fruit production.

Harry Klee at University of Florida, for example, uses tomatoes as models to research the regulation of plant volatiles and their role in flavor and nutrition. Not surprisingly, more than 7,000 flavor volatiles have been cataloged from foods and beverages to date. In a review of the correlation between health benefits and taste perceptions of foods, he says, "Virtually all of the major tomato volatiles can be linked to compounds providing health benefits in humans." But, he adds, "Generally, domestication has had a negative effect on tomato flavor and volatile production. Breeding programs have historically focused on yield, color, shape, and disease resistance."

As a consequence, he says, "Dissociation of flavors from their natural nutritional context may create undesirable health consequences.... Flavor preferences together with health benefits should be considered in future food production and in crop-enhancement strategies.

Klee's work is supported by NSF.