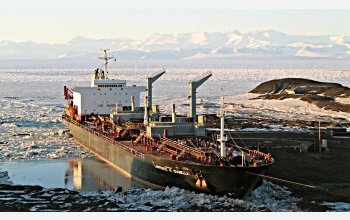 The tanker Lawrence H. Gianella sits alongside the ice pier at McMurdo Station in Antarctica.

Overcoming challenging ice conditions, a ship has safely delivered cargo needed to supply National Science Foundation research stations in Antarctica through the coming austral winter and into the next research season.

Fuel required to heat the stations and power aircraft and other vehicles is currently being transferred from a tanker into storage tanks on land.

The cargo vessel American Tern arrived at McMurdo Station's ice pier on Feb. 2. With its cargo safely offloaded, and with recyclable materials and other goods stowed aboard, the Tern was escorted out of McMurdo Sound by the Russian icebreaker Krasin earlier this week. The cargo ship has steamed safely beyond the ice-clogged region and is now headed north.

NSF chartered the Krasin to cut and maintain a channel through the thick, multiyear ice covering the Ross Sea and the sound into McMurdo Station.

Meanwhile, the tanker Lawrence H. Gianella is offloading fuel and is expected to complete its operations by Feb. 11, when it too will be escorted north through the sea ice.

With the safe arrival and off-load of the ships, preparations for the long, dark Antarctic winter at McMurdo are nearing completion.

NSF, which manages the U.S. Antarctic Program, maintains two year-round posts on the Antarctic continent: Amundsen-Scott South Pole Station and McMurdo Station. Palmer Station, located on the Antarctic Peninsula, does not rely on the supplies delivered to McMurdo.