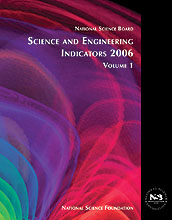 Highlighting a "changed" world, the National Science Board (NSB) will release its biennial report to the President, Science and Engineering Indicators 2006, in a media briefing February 23 on Capitol Hill. Several board members will be present to discuss the report's major findings and their concerns over the state of K-12 science and mathematics education.

At the 90-minute briefing, scheduled at the Longworth House Office Building, room 1537, starting at 9:00 a.m., NSB members will review their concerns, key findings and recommendations, which they presented in a report to the President, Congress and the public issued concurrently with Indicators. Entitled America's Pressing Challenge – Building a Stronger Foundation, the separate report to the President and Congress makes several recommendations to address the continued lackluster performance of America's students in K-12 science and mathematics education.  It calls for equal classroom time for science, mathematics and reading and a much stronger commitment to attracting and retaining teachers through better pay and professional development experiences.

Among other findings, the new Indicators reports that international R&D growth and competition in many East Asian nations has now been transformed from "potential" to "reality." The situation makes more immediate the need for improvements in K-12 science and math education, Board members will say.

The NSB consists of 24 members and the director of the National Science Foundation (NSF)--preeminent scientists, engineers and educators appointed by the President and confirmed by the Senate--who serve as an independent advisory body to the President and Congress on matters of national science and engineering policy. The science board also serves as the policy making and oversight body for the NSF, the federal agency that supports nearly all fields of scientific and engineering research, and education.

Printed copies of the reports and accompanying CDs will be available at the briefing.  Embargoed copies are available upon request from the media contact listed below.  Biographical sketches of participating NSB/NSF officials also are listed below.