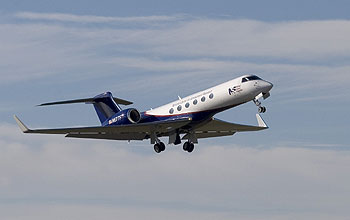 HIAPER takes to the skies for its first science mission on March 2, 2006.

Today, the nation's most-advanced research aircraft will take flight on its first science mission.  Scientists aboard will study a severe type of atmospheric turbulence that forms near mountains and endangers planes flying in the vicinity. The mission will last two months, ending on April 30, 2006.

Owned by the National Science Foundation (NSF) and operated by the National Center for Atmospheric Research (NCAR) in Boulder, Colo., the aircraft will fly over treacherous whirlwinds, known as rotors, as they form above the California Sierra Nevada range.

Called HIAPER (High-performance Instrumented Airborne Platform for Environmental Research), the plane will embark on a series of 10-hour flights that will take it from its base at Jefferson County Airport in Colorado to California's central valley during the Terrain-Induced Rotor Experiment, or T-REX.

Rotors, which form on the lee side of high, steep mountains, have contributed to a number of aircraft accidents, but scientists know little about their structure and evolution. They are common in the Sierras because the area has the steepest topography in the continental United States. Owens Valley, where T-REX will be based, sits some 10,000 feet directly below the highest peaks of the adjacent mountains

Capable of reaching an altitude of 51,000 feet and cruising for 7,000 miles, HIAPER is ideally suited for this experiment, say atmospheric researchers.

"HIAPER's first science campaign, on the origin and evolution of rotors, could not have been done without the long-range capabilities of such an aircraft," says Margaret Leinen, NSF assistant director for geosciences. "In addition, HIAPER's communications and data capabilities will allow the entire T-REX science team to participate in the experiment, whether or not they are actually on board."

An international research team of about 60 scientists, led by Vanda Grubisic of the Desert Research Institute in Reno, Nev., will study the rotors from several perspectives. On the ground, researchers will probe rotors with radars, lidars (laser-based radars), automated weather stations, wind profilers, and balloons.

Researchers aboard HIAPER will observe rotors from above and release instruments called dropsondes into the most turbulent areas. Two other aircraft from Great Britain and the University of Wyoming, flying at lower elevations, will gather data and aim cloud radars into the rotors.

"After more than a decade of planning and several years of engineering studies, NSF's HIAPER is ready for its first full scale research project," says Jim Huning, NSF program director for the airborne platform. "The project will help forecasters predict when and where rotors are most likely to occur and the degree of their intensity, as well as the nature of the mountain waves that crest high above rotors and cause strong turbulence. Without information gathered on HIAPER flights, this understanding would not be possible."

Rotors have intrigued scientists since the 19th century, "and frustrated pilots since they started flying near mountains,” Grubisic says. "With the newest advances in airborne measurements, remote sensing, and atmospheric modeling, we are can now tackle basic scientific questions on the evolution and predictability of rotors, and of breaking mountain waves. The results will improve aviation safety near mountainous terrain."

Scientists will also study the pollutants and particles that are moved around by air waves above and near mountains, and that affect climate and air quality. By flying as high as the lower stratosphere, HIAPER will enable researchers to gather data about the distribution of chemicals high in the atmosphere after mountain waves rearrange the chemicals.

"From a scientific point of view, this will be a fantastic part of the atmosphere to be flying around in because of the turbulence and the movements of air masses," says T-REX scientist Jorgen Jensen of NCAR. "With our advanced instrument payload and our flight paths, the amount of data we will collect will be unprecedented for describing airflow over mountains."

Results from this project "should enable models to be more effective in forecasting turbulent conditions associated with mountain waves," says scientist Richard Dirks of NCAR.

The T-REX team will include veteran NCAR researcher Joachim Kuettner, who first explored the newly discovered rotors in Germany in the 1930s with an open sailplane. Now 96, Kuettner is a principal investigator on T-REX. "I've always wanted to explore rotors," he says. "It's taken me this long to find a way."

Thanks to HIAPER, Kuettner's dream of understanding turbulence near high mountains may soon become a reality.