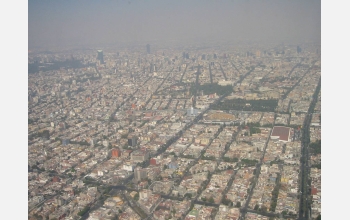 Editor's Note: The Ecological Society of America is holding its annual meeting in Memphis, Tenn, on Aug. 6-11, 2006. NSF supports ecology research in many areas. This result is one example of what we're learning.

An international team of researchers has headed into the field for one of the most complex campaigns ever undertaken in atmospheric chemistry: a month-long investigation of air pollution as it flows downwind from Mexico City.

The scientists expect that their assessment of the pollution's impact on regional and global air quality, climate and ecosystems will be applicable to megacities--cities with 10 million or more inhabitants--in locations around the world.

The project, called Megacity Impacts of Regional and Global Environments (MIRAGE), is scheduled to run from March 1 to 29, 2006, and is led by scientists at the National Center for Atmospheric Research (NCAR) in Boulder, Colo., in partnership with researchers at several U.S. universities and other organizations.

MIRAGE is one component of a set of simultaneous field campaigns collectively called Megacity Initiative: Local and Global Research Observations (MILAGRO), an international effort that will observe and quantify air pollution emitted by Mexico City from multiple perspectives. The MIRAGE portion of this larger project is funded by the National Science Foundation (NSF), which is also NCAR's primary sponsor; other components are supported by the U.S. Department of Energy, the Molina Center on Energy and the Environment, and NASA.

"Mexico City's pollution probably doesn't have a global impact, but all urban areas together do, and the world is quickly urbanizing," explains NCAR scientist Sasha Madronich, one of MIRAGE's principal investigators. "If we can understand the pollution impacts of Mexico City, we can apply this new knowledge to other urban areas across the globe."

The MIRAGE project researchers, who come from more than 60 institutions in the United States, Mexico, and several other nations, will coordinate aircraft and ground-based measurements, satellite observations, and computer modeling in an effort to shed light on four questions:

"We're not looking so much at pollution inside the city, because that's already fairly well known," Madronich says. "We're looking at the outflow. For the first time we'll have an idea of how much pollution is affecting areas outside the city, and be able to understand its full importance."

Because air pollution is complicated, both chemically and physically, and evolves over time and distance, scientists have traditionally faced difficulties in quantifying its components. The MIRAGE team will use aircraft, ground stations, and satellite observations to gather data on how Mexico City's air pollution ages as it disperses in the first hours and days after emission.

Researchers based in Veracruz, located east of the capital on the Gulf of Mexico, will crisscross Mexico City's pollution plume in NSF's C-130 aircraft. Using a complex package of instruments, they'll make multiple flights to sample the gases and aerosols that comprise the plume, which usually spreads northeast from the city.

They will also set up ground-based instruments at the Technical University of Tecamac, about 25 miles (40 kilometers) northeast of the city. From there, the scientists will launch GPS radiosondes, instrument packages attached to helium balloons that send atmospheric measurements to the ground via radio. The radiosondes will make vertical profiles of winds, temperatures, and humidity from the ground through the lower stratosphere.

MIRAGE is especially significant because it focuses on both aerosols (airborne particles of dust, soot, and other pollutants) and gaseous pollutants (including ozone, nitrogen oxides, carbon monoxide, sulfur dioxide, and hydrocarbons and their oxidation products), according to Anne-Marie Schmoltner, program director in NSF's division of atmospheric sciences.

"In the past there have been air campaigns during which researchers have made lots of aerosol measurements, and other ones during which they've emphasized gas measurements," Madronich says. "The uniqueness of MIRAGE is that it brings them together, allowing us to study interactions between gases and aerosols."

The researchers chose Mexico City for MIRAGE because it is the world's third largest urban area, has some of the worst air quality in the world, and is situated in the tropics, as are most fast-growing megacities in developing nations.

Current computer models for studying air pollution were developed mainly for cities in industrialized nations, Madronich says. They don't transfer well to megacities in the developing world, where people are more likely to burn coal and wood and drive vehicles that emit more harmful chemicals.

The field campaign will also provide information about aerosols, such as how long they endure in the atmosphere and how they affect clouds, that is useful for scientists who make computer models of global climate.

"The lifetime of organic aerosols may be longer than climate modelers have thought, and this could have a huge effect on climate," Madronich says./p>

Most importantly, says Schmoltner, "Air pollution is no longer a local problem. We all share the same atmosphere, so whatever is emitted in one place can have effects far from its origin. This project will produce a wealth of data that will be important to scientists' understanding of the chemistry of the atmosphere, and to the policy-makers who need to decide on the best strategies for reducing pollutant emissions and their negative impacts."