Surgical aid, medical diagnostic and bomb sniffer may be all in a day's work for this little machine 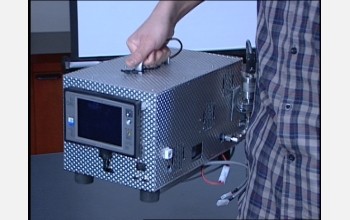 The Purdue miniature mass spectrometer can easily be carried with one hand.

Researchers at Purdue University have developed a new, ultra-fast chemical-analysis system, with potential applications that range from sniffing luggage for explosive residues to detecting molecular disease markers in urine samples.

Recently, in fact, the researchers demonstrated that their system can rapidly and accurately detect the boundary between cancerous tissue and healthy tissue in the liver--information that could help surgeons make sure they had removed the entire tumor and spared the normal tissue.

"I wouldn't be surprised if pathologists are using this in operating rooms within two years," said Purdue's R. Graham Cooks, the analytical chemist who heads the research effort.

Cooks and his colleagues describe their work in the March 17 issue of the journal Science.

Much of their funding has been provided by the National Science Foundation and the Office of Naval Research, as well as by Inproteo LLC and Prosolia Inc, two Ind. companies engaged in commercializing technology developed at Purdue.

Cooks' team's overall goal has been to speed up and simplify the use of the mass spectrometer, an analytical device that has long been a laboratory fixture. In earlier work, the team tackled the large size, handling difficulties and expense of conventional mass spectrometers. Those efforts resulted in a portable, shoebox-sized instrument that weighs just 22 pounds (10 kilograms) in its current version, or about 30 times less than a conventional mass spectrometer. Moreover, that weight includes a battery pack that allows the miniaturized instrument to be carried into the field to reach the sample, rather than bringing the sample to the instrument in the lab.

Now, in the work reported in Science, the Purdue team has addressed the limitation that conventional mass spectrometers can analyze only samples that have been specially prepared. Their solution is a wand-like probe that can quickly gather chemical information from ordinary samples out in the open air. Based on a process known as desorption electrospray ionization, or DESI, the probe will essentially blast the molecules off any available surface using a mist of microscopic, ionized water droplets.

"The theme in our lab is, 'Don't mess with chemicals,' meaning we don't undertake the usual chemical separations and manipulations needed for conventional mass spectrometry," says Cooks.