Predator has sharp teeth, a crocodile-like head and flattened body 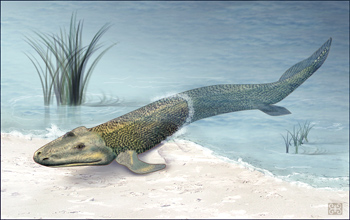 Working in rocks more than 375 million years old far above the Arctic Circle, paleontologists have discovered a remarkable new fossil species that represents the most compelling evidence yet of an intermediate stage between fish and early limbed animals.

The new species has a skull, neck, ribs, and parts of a fin that resemble the earliest limbed animals, called tetrapods. But the creature also has fins and scales like a fish.

"Paleontologists have known that animals first appeared on land in the Devonian Period," said Richard Lane, program director in the National Science Foundation (NSF)'s division of earth sciences, which funded the research. "To reach this evolutionary milestone, a skeletal progression from fish to land-roaming tetrapods would have been needed. Now we have new evidence of that progression."

The back of the animal's skull, neck, ribs and fins "are particularly tetrapod-like while the snout, lower jaws, and scale-cover are similar to those seen in closely related fish," Shubin said. The animal was a predator with sharp teeth, a crocodile-like head and a flattened body.

Scientists collected the fossils during four summer explorations on Ellesmere Island in Canada's Nunavut Territory. They turned to the people of Nunavut, who retain ownership of the fossils, for help in naming the new creature. The Nunavut Elders Council suggested the name "Tiktaalik" (tic-TA-lick), their word for a large, shallow-water fish.

At the time Tiktaalik lived, the Canadian Arctic region was part of a landmass that straddled the equator and had a subtropical climate. The deposits that produced the Tiktaalik fossils were left by stream systems meandering across wide floodplains.

"This kind of shallow stream system seems to be where many features of land-living animals first arose," said Ted Daeschler of the Academy of Natural Sciences in Philadelphia. "The species shows that evolution from life in water to life on land happened gradually in fish in shallow water."

The skeletal structure of Tiktaalik and the nature of the deposits where it was found suggest an animal that lived on the water bottom, in the shallows, and perhaps even out of the water for short periods.

"The skeleton of Tiktaalik indicates that it could support its body under the force of gravity whether in very shallow water or on land," said Farish Jenkins of Harvard University. "This represents a critical early phase in the evolution of all limbed animals, including us."

The project was also funded by the National Geographic Society, an anonymous donor, and the researchers' institutions. The team also relied on geological mapping by the Geological Survey of Canada.